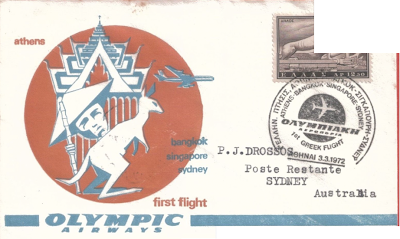 The Timetablist periodically features rare examples of the famous Europe-to-Australia "Kangaroo Route" from decades in the past, and as this month comes to a close it is noted that we nearly passed out of the Eastern Mediterranean region, which has been the focus of this November, and indeed through Athens itself without featuring this article: a First Flight Cover Envelope commemorating the inauguration of Olympic Airways's Athens—Bangkok—Singapore—Sydney trans-equatorial trunk route, which launched on 3 March, 1972.

The envelope features a vaguely Oriental motif of an orange-red Rising Sun as backdrop to an ensemble of caricatures: a stepped pagoda-temple roof, under which the head of a stereotypically East Asian peasant squints underneath an iconic conical hat, overload with some sort of bamboo staff, which is joined by a sharp-jointed Kangaroo, erect but indifferent, facing away from the viewer. At the upper right, a B720-style quadjet whisks toward the cancelation step, a specialized imprint which repeats the itinerary in English and Greek, angle-impressed upon a Hellenic stamp which features the Terrace of Lions at Delos.

Olympic would keep its Antipodean link almost up until its demise, serving both the sizable Greek-Aussie community in Melbourne and Sydney as well as a cheap backpacker's shuttle to bumming around Southeast Asia. Although there are no longer any Greek trans-hemispheric airlines today, there is still a popular Athens-to-Singapore discount route, as discussed earlier this month.