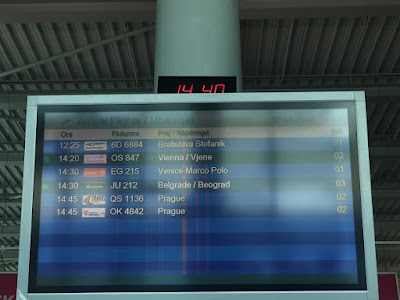 All's rather quiet at the main international airport in Albania, Mother Teresa in Tirana, the capital. The mid-afternoon bank of flights is a mix of scheduled flag carriers such as Austrian from Vienna, Air Serbia from Belgrade, and ČSA Czech from Prague, and a smattering of charters from Prague, Venice and Bratislava.
No comments: 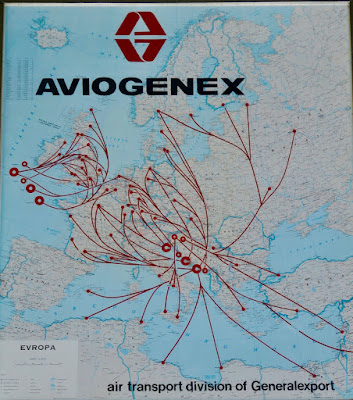 An undated route map, found in a dusty display on the upper level of the Aeronautical Museum of Yugoslavia on the grounds of Aerodrom Nikola Tesla in Belgrade, Serbia. A conventional map of Europa is overlaid with the red lines of the complete Aviogenex system during the Yugoslavian airline's prime. Although a subsidiary of the Belgrade-based Generalexport conglomerate (as the map prominently notes at the bottom), the leisure airline's impressive array of coverage emanated out of the Croatian coast, with the largest bases at Pula in Istria, and Split and Dubrovnik in Dalmatia, marked by large red bullseyes around their place names. Other large stations at Zadar and inland at Zagreb and Ljubljana and what looks to be Titograd (today Podgorica, Montenegro).

From here, the red-striped Aviogenex jets plunged further south across the Mediterranean from Algiers to Benghazi to Beirut. A single branch outward from Zagreb splays outward and off the map (to what is probably Aqaba, Jordan) and turns northeastward to spread to Leningrad, Helsinki, and Oslo.

Aviogenex was even more impressive in northwestern Europe, with intense coverage of Germany, France and especially the British Isles; the home hubs had to been repeated at the mouth of the English Channel underneath Ireland to adequately show the web of connections to 16 cities, including  not just Birmingham and Leeds (as with the rest of the map rendered in Croatian Latin script, here spelled "Lidz") but many smaller airports such as Cardiff, Bristol, Bournemouth and Norwich, and what appears to be Kirkwall Airport in the Orkney Islands, which even today in the great Thomas Cook package tour era of cheap charters is not connected to the Canaries or Balearics, much less Montenegro.

This is reflective of the enormous popularity of Yugoslavia as a British tourism destination in the 1980s, when it was even more popular than Spain and Yugotours was one of the UK's most popular tour agencies, which all declined with the 1990s break-up and war. While Aviogenex was not a victim of this catastrophe, it was shadow of its former self and limped along until 2015, meeting its demise just before the latest explosion in Adriatic leisure aviation.
3 comments: