Saudia's flights initially are scheduled to operate through September, primarily for the summer tourism season in Florida. But airport officials said they hope the route will be successful and that service will be extended.

''Saudia is the flagship carrier for Saudia Arabia and the only airline offering nonstop service from the U.S. to the Kingdom of Saudia Arabia,'' said Keith Phildius, senior vice president for international development and marketing for Orlando International.

It is the second airline from the Mideast to announce seasonal service to Orlando in the past six months. In January, El Al Israel Airline launched twice weekly service to Orlando International through Feb. 20 and the end of the pilgrimage season to the Holy Land.

''I think it says a lot that within a two or three-month period of time, two of the world's renowned airlines - Aeroflot and Saudia - are coming to Orlando. It's good news,'' Phildius said.

More than a dozen airlines provide regularly scheduled international service to 20 destinations from Orlando. Another 40 charter airlines fly frequently between scores of other foreign cities and Orlando.

Airport officials said the decision by Saudia Airlines to fly to Orlando, shuttling tourists and business travelers to Central Florida, helps Orlando stretch its vision as an international center.

''This goes beyond our traditional markets of Latin America and Europe,'' said Carolyn Fennell, a spokeswoman for the Greater Orlando Aviation Authority.

A representative of Saudia Airlines could not be reached Monday, and Orlando airport officials had no further details about the service.
No comments: 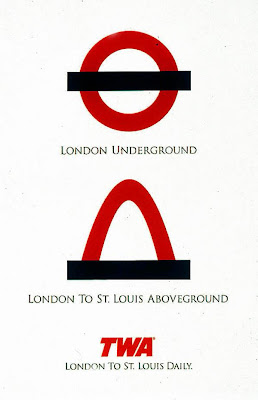 Long-gone are the days when Trans World Airlines even existed, or that there was a sizeable airline hub at Lambert Airport in St. Louis, or that there was intercontinental service from the airport. But in the golden years of the 1980s and 1990s, St Louis acted as a mid-American cross-roads, linking the plains states with the coasts, in addition to a highly-prestigious cluster of cross-pond services to London and Paris. The London services peaked at a double-daily operation in the summer of 1997.

The simple symbolism of the above advertisement is clever, graphically rearranging the elements of the famous London underground logo to look both like the Gateway Arch and link the arc of an airplane flight, taking off and landing on two different continents.

Regretfully, any international service at St. Louis today stretches only as far as Toronto or Cancún. American Airlines picked over the remnants of bankrupt TWA in 2001, ending trans-atlantic services soon after the takeover, and shutting down the hub operations in St. Louis over the next decade.
No comments: