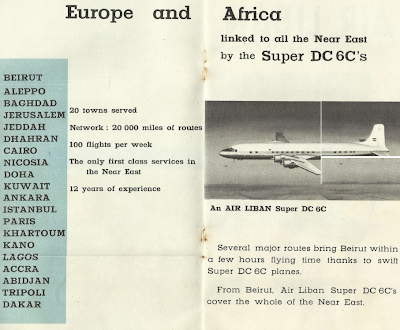 Prior to becoming Middle East Airlines, the flag carrier of Lebanon was known as Air Liban. Formed in 1945, it quickly expanded across Southwest Asia, Europe and into Africa as reflected in the destination list on this vintage brochure: Near East destinations include Aleppo and Baghdad, and fourth city is listed Jerusalem—a somewhat remarkable historical phenomenon, although this likely references the old Atarot Airport, at the time located in the Jordanian-annexed West Bank. Regardless, "Jerusalem" makes its Timetablist debut here.

Further into the Gulf extends a spine of Jeddah—Dhahran—Doha—Kuwait; it is important to realize that, long before the rise of thee Gulf super-carriers, MEA/Air Liban was the primary airline of the Arab World, as its expansive name implies.

Looking Westward, Air Liban ran its "swift Super DC-6C planes" to Nicosia, Ankara, Istanbul and to its only Western European capital, Paris, while send a second route to Cairo and Tripoli, with its most southernly service across the Red Sea to Khartoum, then spanning the vast Sahara to reach Kano, Lagos, Accra, Abidjan, and finally terminating at Dakar. This unusual number of West African destinations linked the Syrian-Lebanese commercial diaspora of coastal urban West Africa to their homeland.