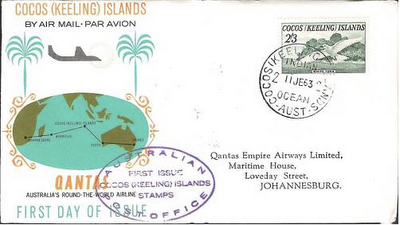 A delightful specimen from 1963, affixed with the postage of the Cook Islands. The pleasantly-hued map depicts the routing: Sydney-Perth-Cocos Islands-Mauritius-Johannesburg. Nowadays the route is non-stop from Sydney, and South African Airways still serves Perth from Jo'berg. Air Mauritius serves Perth, Melbourne and Sydney.
No comments: 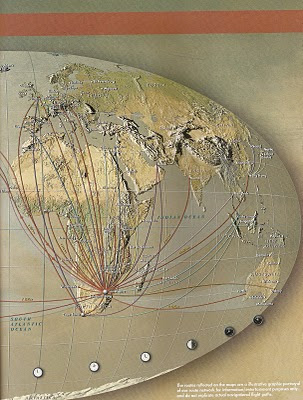 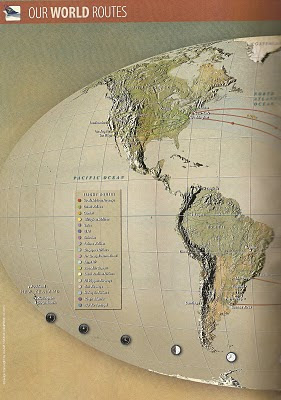 This copper-and-chrome worldview shows the rainbow nation's reach via its flag carrier, with routes to North and South America, Australia, and Asia, as well as a dozen routes across its home continent.
No comments: 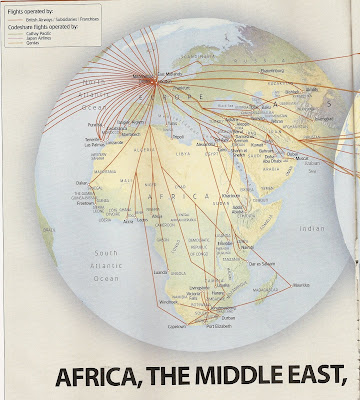 A decade before Air France's map from yesterday is this classic BA map, with its signature "silk-web" route lines-- a typical throwback the company's heritage. Note the intra-South African flights, served by its affiliate Comair, as well as the now extinct Harare route, and the extension to Freetown.
No comments: 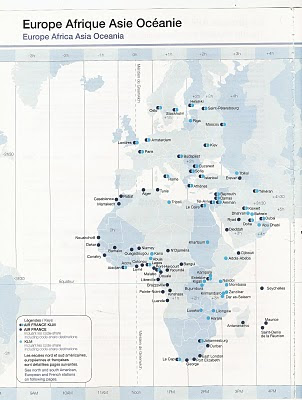 Air France and KLM, united as one company, dominate routes to Africa. Air France still serves nearly every former colonial capital, and KLM, an oil industry favorite, with strong East African services, overlays this network well. Taken with Skyteam's Kenya Airways affiliation, and the alliance is an African powerhouse (and a highly profitable venture).
No comments:

With the recent shocking tragedy of Afriqiyah 771 from Johannesburg, its timely to note this somewhat curious but fast-growing carrier, which unexpectedly emerged from the reclusive state and is well on its way to having a significant hub connecting Africa and Europe, often for prices far lower than the European carriers. In keeping with the Libyan government's fervent interest in—and frequent interference with—the West African region, the Afriqiyah venture was an attempt to solidify commercial links between Libya and the Saharan states, linking an array of francophone capitals such as Bangui, Cotonou, Lomé, N'Djamena, Niamey, and Ouagadougou that have traditionally only had long-haul links to Paris on Air France and Brussels on Sabena or Brussels Airlines. Afriqiyah serves those European cities as well, in addition to more secondary airports such as Geneva and Düsseldorf.
No comments: 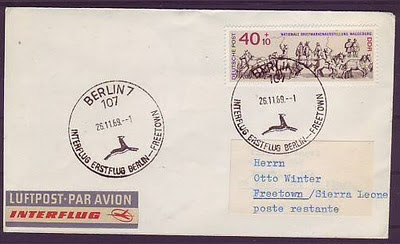 Earlier than its 1972 celebration of jet service to West Africa is this November 1969 inaugural Freetown flight, although its not clear just what distinguishes the two events or what aircraft might have been in use, although with only the origin and destination listed, it suggests non-stop service. A handsome gazelle leaps gracefully across the cancellation stamp.
No comments: 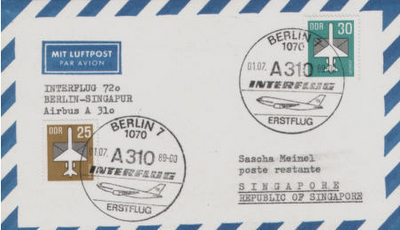 Very late in its life, Interflug changed course radically, utilizing Western Airbus aircraft and stretching farther in search of relevance and revenue, such as this July 1989 launch to Singapore. Interflug would be liquidated by Lufthansa less than two years later. Apparently not enough East Berliners headed to Raffles.
No comments: