Ghana Airways: Düsseldorf-Accra and all of West Africa, c.1990 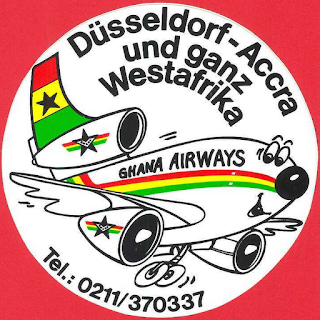 A cartoon DC-10 smiles from a German-language Ghana Airways sticker celebrating Ghana Airways service from Düsseldorf to Accra sometime around 1990. The state airline stretched from Westphalia to West Africa nearly until its demise, serving the burgeoning immigrant communities of the Rhine region as one of the airline's few European destinations (London Gatwick was consistently the other, which it sometimes flew to via Germany).
2 comments:

Four years on the map featured in yesterday's post and Ghana Airways has indeed entered the jet era with its flagship VC-10 shown atop this schedule, whilst running routes from Accra to London, Zürich, Cairo and Beirut. Rome is also shown on the above network, but is unlabeled. The Soviet venture has been dropped, it seems, as Moscow and Prague are no longer shown, and the other north African destinations are likewise absent.

The West African run remains, as does the route to Ouagadougou, although not Bamako.  Kumasi is now shown. Additionally, a British United connection from Monrovia to London via the Canaries is shown in a dashed line. 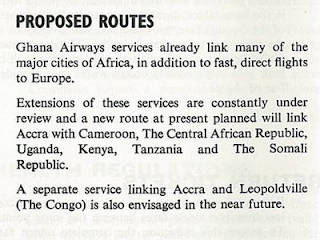 Khartoum is also gone, but in its place are "proposed routes" stretching across the belt of Africa, from Lagos to Douala, Bangui, Entebbe, and Nairobi, splitting there to terminate at Dar Es Salaam and Mogadishu. Leopoldville is also linked in with this planned expansion. Whether these destinations were ever reached is unclear; a timetable from 1972 shows none of these central African cities. 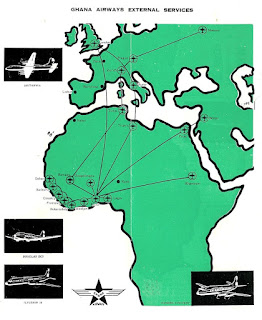 During the same time frame as yesterday's newspaper advert, boasting of a Second-generation jet service from Ghana Airways, the above map showed the extent of the airline's international network, or as it uniquely says here, its "External Services."

The route includes the classic West African littoral ply from Lagos to Dakar via Abidjan, Monrovia (Robertsfield), Freetown, Conakry, and Bathurst. Also included in West Africa is hops north to Ouagadougou and Bamako, the second of which interestingly continues north to Tunis, then Zürich followed by Prague, and finally ending at Moscow. This was the era when President Kwame Nkrumah was courting Eastern overtures as well as Western in the immediate post-independence period. This triangulation would manifest itself most visibly at Ghana Airways, which received a handful of Illyushin Il-18s, as can be seen at lower left underneath the Dougla DC-3s and in adjacent corners from its other fleet types, the British Vickers Viscount and Bristol Brittania. The Soviet props were employed only for Ghana Airway's intra-African routes, such as the stretches to Khartoum and Cairo which then went on to Beirut on a weekly basis.

But Ghana's back was not turned away from its colonial parent, as can be seen from the air company's dual routes to London, one via Tripoli and Rome, the other direct non-stop, the longest route for the company at the time. 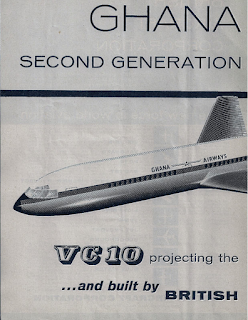 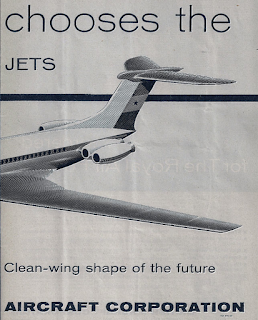 A wonderful vintage newspaper advertisement from some time in the early 1960s, as Ghana Airways had announced their intention to purchase three Vickers Aircraft VC-10s. Note that the advert states "built by British Aircraft Corporation" as Vickers was coming into a government-pressured nationalization scheme to form BAC. The tagline, "projecting the Clean-wing shape of the future," underscores the delightful optimism of the announcement.

The 2-page spread above is dominated by the broad airliner zooming across the sheet, presumably on a future flight between London Heathrow and Accra Kotoka.
No comments: 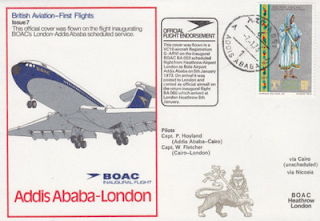 The holder of this envelope can almost hear the roar of BOAC's super VC-10s quad engines as the airliner touches down for the first time at Bole Airport in early January1973. The gorgeous illustration, set at a dynamic perspective, dominates this stately and information-backed first flight cover.

BOAC's classic, dashing speed bird emblem appears several times, most notably at the header of the paragraph-long Official Flight Endorsement which provides exacting detail on the itinerary of this piece of paper from Heathrow to Addis Ababa and back, although it is elsewhere, at far right, that the intermediate stops: Nicosia and Cairo, the latter categorized, curiously, as "unscheduled."

More space, if not heavier ink, is given over to the regal Lion of Judah, symbol of the Ethiopian monarch and not dissimilar from Queen Elizabeth's heraldic menagerie.
No comments:

Air India's mascot, the Maharaja, meets a Sheikh and presents him a flower on the occasion of Air India's inaugural Bombay-Kuwait service in October 1960. No information about intermediate stops or aircraft is included.
No comments: 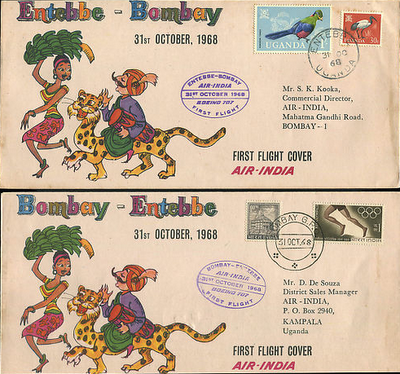 Returning back from Bombay to East Africa on nearly the same day, this envelope celebrates the launch of service from India to Uganda in October 1968, with a Boeing 707. Its not clear whether this is the same flight as that which landed at Addis Ababa, or a dedicated service.

The kindergarten-crayon, juice-box colored illustration is a curious choice, with a sort of bizarre parade of the Maharaja riding a leopard, either chasing or marching alongside a slender, bejeweled but barefoot woman, balancing a bunch of green bananas on her bun. On the first envelope, this at least fits the gorgeous colors of the tropical bird on the Ugandan stamp.
1 comment:

A first-flight cover for Air India from Addis Ababa to Bombay on 27 October 1968, which the cancellation stamp states was flown by a Boeing 707, without information on any intermediate stops. Compare the cartoonish Maharaja's donkey with the Ethiopian Stamp's stately stallions of the orthodox icons.
No comments:

In the colonial era, when only Ethiopia was not under European control, Ethiopian Airlines flew its DC-6s on the "Wonderland Route" between Addis Ababa and Nairobi in the Kenya Colony. Also advertised are Aden, Djibouti, Egypt (presumably Cairo), Sudan (surely Khartoum), Eritrea (likely Asmara), Pakistan (possibly Karachi), Saudi Arabia and "East Africa." Shown on the cover of this brochure is an office block labeled "America House" which is presumably Ethiopian's office in pre-independence Nairobi. Exact date of the item is unknown.
No comments:

Via this website, it is a colorful brochure espousing the wonders of the Hidden Empire, including this straightforward network map of the flag carrier. Ethiopian then reached 18 international destinations in Europe, Asia and spanning the African continent from Asmara to Abidjan and Dar Es Salaam to Douala.
The domestic map shows an enormous coverage within the diverse country, with more than 40 destinations from the Red Sea to the Blue Nile, most served at the time with DC-3 aircraft-- as the brochure states, the flagship B707s, shown in the above image on the apron at Addis Ababa Bole Airport, were reserved for the intercontinental services to Delhi and Rome.
No comments: 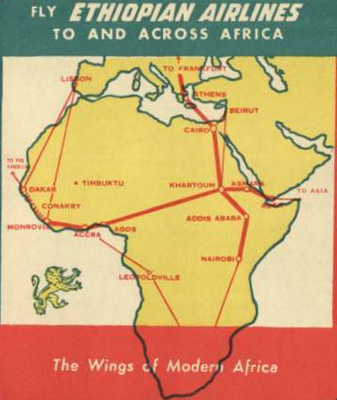 Appearing almost like the fuzzy felt of a drinks coaster, this map of Ethiopian Airlines mid-century network is a warm and wonderful scene, showing the African continent between a green and red band, like the imperial flag of Ethiopia itself, with the lion of Judah in the southern Atlantic at the lower left of the graphic.
A main North-South route runs between Nairobi and Cairo. A lateral route links Monrovia via Accra and Lagos. Presumably, the two lines angling down the cone of Southern Africa terminate at Johannesburg, but this is not specified, and neither is the significance of the thin lines versus the thick red bolts, which quite curiously cross not at Addis Ababa but at Khartoum. The Monrovia-Conakry-Dakar portion is also a striped hash line, perhaps suggesting that this trunk was not underway but was a future intention. Timbuktu is shown but seemingly not part of the network.
Above the Mediterranean, a rather random assortment of gateways are served: Lisbon, Athens, Frankfurt and Beirut. Aden is linked to Asmara, with promises of more of Asia off to the right of the map. A tiny arrow of the coast of Cap Vert suggests trans-Atlantic connections to the Americas.
No comments: 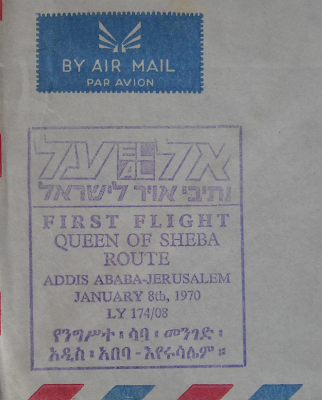 Another tri-lingual envelope, this from El Al, which at the beginning of 1970 spread its wings to connect to the two ancient realms of the Holy Land and Abyssinia with a "Queen of Sheba" route from what it refers to as "Jerusalem" but is surely Ben Gurion Airport, normally referred to as Tel Aviv in regular usage, and the Ethiopian Capital, Addis Ababa. The indigo ink mark uses English, Hebrew, and Amharic and announce the launch. Despite the Jewish community in Ethiopia, the route is not served today.
No comments: 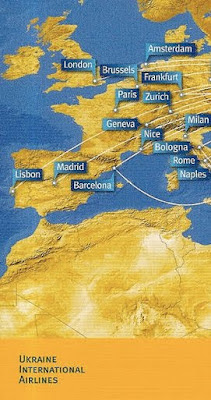 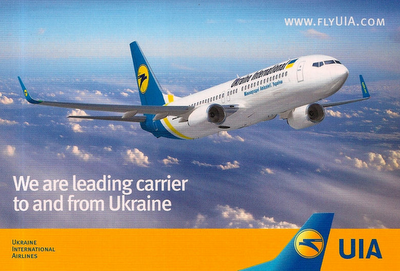 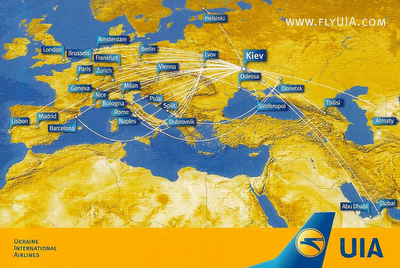 Ukraine International Airlines is not to be confused with Air Ukraine International, which once reached as far as New York but later failed. The above images are from a recent, well-designed card showing its route network across Europe and into Southwest Asia, from Amsterdam to Almaty. Note in particular the connections between the secondary cities of Lvov and Donetsk with Italy, Barcelona, Split, and other Mediterranean leisure destinations.
The next post will show a detail of its western European spread.
1 comment: 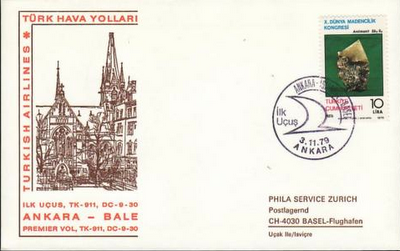 Turkish Airlines is today nearing the status of a global carrier, with services to nearly every continent from an increasingly busy hub at Istanbul Atatürk Airport. Half a lifetime ago, it was better know by its Turkish initials, THY, standing for Türk Hava Yollari, which is spelled out on this first-day cover envelope from 1979 along with its more familiar English-name (the cover also features German and French). The woodcut seems to feature the Gothic spires of Basel rather than the concrete blocks of Ankara.
The airline today reaches far beyond Switzerland, with bigger aircraft than the DC-9-30, although the sharp-angled emblem remains the same: something of a combination of a bird and a crescent moon.
No comments:

The status of Philippine Airlines Flight PR107 from Las Vegas to Vancouver, with onward service to Ninoy Aquino International Airport at Manila, Philippines. Surely one of the more unusual transborder scheduled services in North America, and one of the more exotic airlines serving Nevada, Philippine Airlines seems to have been successful in adding McCarran to its trans-Pacific quad jet flight to Vancouver. Possibly the infinite affinity particular to the Filipino for fancy gambling fanfare makes this peculiar flight pattern feasible.
No comments: 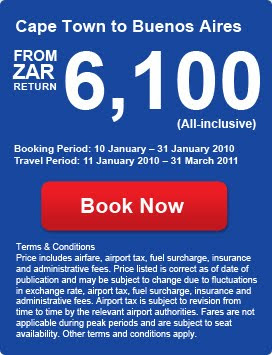 Of all the routes that Malaysia Airlines has pulled down, such as its Newark-Dubai-Kuala Lumpur and later Newark-Stockholm-Kuala Lumpur B777 service-- and all the cities it has withdrawn from--its list of terminated destinations is long-- none is quite so unusual, and so unfortunate, as the recent end of its Kuala Lumpur-Cape Town-Buenos Aires service. Just a year ago, the airline was offering special fares, priced in rand, for the transatlantic leg of the journey. Now, the airline has completely withdrawn from the South American continent, and without any African destinations outside of Cairo.
Cape Town itself is now without a nonstop connection to South America, although southeast Asia can still be reached with Singapore Airlines's nonstop to Singapore (the inevitable competition of this service may have been a primary factor in Malaysia's withdrawal). Buenos Aires passengers must head eastward to Johannesburg and connect to South African Airways, which also serves Sao Paulo from OR Tambo. Alternatively, Cape Town travelers can reach Brazil via Luanda on TAAG Angolan Airlines, which bridges to both Sao Paulo and Rio de Janeiro.
No comments: