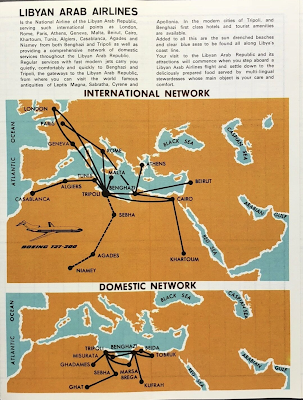 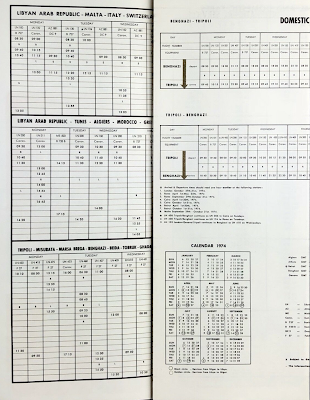 A few pages from a timetable brochure for Libyan Arab Airlines, the flag carrier of the then-5 year old Jamahiriya.
The route map shows a barbell-style network, centered around the primary cities of Tripoli and Benghazi—Libya's second city on the Mediterranean coast acting as an eastern gateway to Athens, Beirut, and Cairo, with the latter taking  southward turn to continue to Khartoum.
From the capital, a single dotted line indicates trans-Saharan route links the midland settlement of Sebha before crossing into Niger, linking Agadez and ending at Niamey. A handsome Boeing 727-200 angles across the Algeria-Mali border.
The second, smaller map covers the same Mediterranean region but shows only the domestic system, an extensive operation from the main cities to ten regional towns, including Misrata, Tobruk, and several, such as Ghadames, Ghat, and Marsa Al Brega, debuting on the Timetablist with this post.
Inside the brochure, a traditional grid timetable displays the weekly schedules, including the equipment used: even in this period Libyan Arab Airlines used nearly an all-jet fleet of Boeing B720Bs, B727s, Douglas DC-9s, and Sud-Aviation Caravelles.