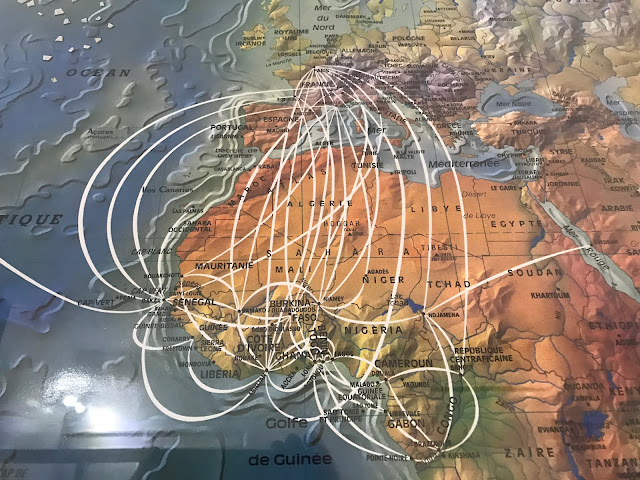 Following on from the previous post, this large-format map allows for a close examination of the regional network of Air Afrique. This network was both extensive and limited, paradoxically, in that it connected the capital cities of the ten member states with an impressive array of links, and yet at the same time served very few other cities in the region and no secondary cities within any country at all, except for the single example that proves the rule: Pointe-Noire, the seaside petrol port in the Congo Republic. But no Nouadhibou, for instance.

Outside of the major cities of its member-states, only Conakry and Lagos are served in Western Africa. Monrovia, Freetown, and Accra are bypassed. In Central Africa, the former member states of Cameroon and Gabon, which both subsequently set up their own national carriers, are still part of the system. Douala is connected to Bangui, Brazzaville, Cotonou, and Lagos—the latter a singular example of a non-member city connected with a non-member city. Even at this scale, it is unclear if the Douala—Cotonou route actually stopped in Malabo or this is just the confusion of the cartography. Likewise, Libreville is linked to Brazzaville, Lomé, and Lagos. No Yaoundé, however.

A small detail that is easy to miss given the contours of the continental shelf is the Dakar—Las Palmas route.
No comments: 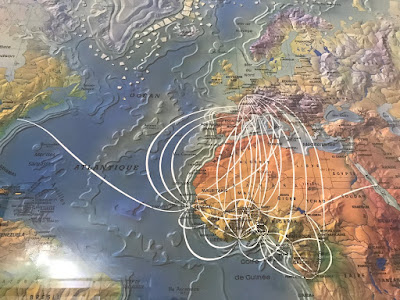 Fitting to end this year's Air Afrique Week with one of the most magnificent items of the airline's heritage that this blog has been able to feature: a 1987 route map, found recently on the wall of a travel agency in Dakar, Senegal.

The Map is based on a popular wall map that was widely distributed in the 1980s, and although strikingly colorful it is not particularly faithful to terrain or topography. It is generally a poor decision to begin a route map from a conventional map, as generally the original cartographer has already displayed a surfeit of information which is extraneous to displaying the airline's route system.

While that is especially true in this case, as a Mercator Projection version of this map is thoroughly critiqued on this cartography blog, in this case the trouble is greatly mitigated by the use of white route lines against the dark, natural palette of the oceans and continents.

Being itself a wall-sized poster, this map is also large enough to visually convey the complex network of Air Afrique to the observer by its scale. Beyond the dense interlacing of its regional network (which will be more thoroughly examined in a separate, subsequent post) what is immediately evident are the long haul connections to other continents.

Chief among these are the many Trans-Saharan routes to France, especially the fountain shower emanating out of Paris: Bordeaux, Abidjan, Lome, Ouagadougou, Marseille, Lyon, Ouagadougou, Rome, N'Djamena, and Bangui.

The interior connections to southernly French cities was surely a stop-over operation: Bamako is connected only to Lyon and Marseille, for instance. Likewise, follow the many lines to see how Niamey, was linked to all three secondary French cities, including, apparently, via Agadez (gateway to vast Areva uranium mine that fuels most of France's public power utility) but not directly to Paris non-stop. Interestingly, one of the other cities not directly connected to Paris is one of the airline's main hubs: Dakar, which seems to be linked only via Nouakchott. or one of several other European cities.

These latter elements—Dakar to Bordeaux, Geneva, Rome, and Marseille— are separated out from the crowd by swinging in a dramatic, centripetal fashion westward, well over the North Atlantic. The only route to the west of this is reverse-S curve Dakar—New York service. As has been stated many times before during our Air Afrique weeks, as much prestige as the multiple routes to the metropole afforded, it was this lone transatlantic operation that was the flagship pride of the consortium.

It is easy in this rendering to overlook the other bell of Air Afrique's dual-hub network: Abidjan, whose ribboning loops link it across the region and again to Lyon, Marseille, Geneva, Bordeaux and again to Paris itself. The last intercontinental element is eastward endeavor from Chad to Jeddah, a nod to the pilgrimage traffic of so many Sahelians.

The following post will focus on the regional route network. 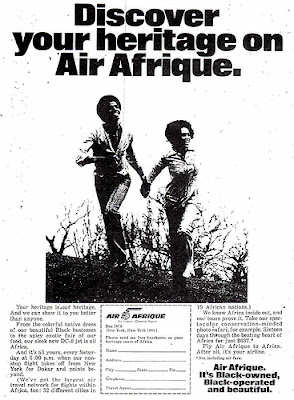 Here's a very unique magazine advertisement from about 1980, specifically targeted at African-American travelers wanting to "discover their heritage" by visiting West Africa. The black-and-white ad mentions Air Afrique's Saturday, 6pm Departures from New York-JFK non-stop to Dakar, and boasts of its vast network without specifically mentioning any other city.
No comments: 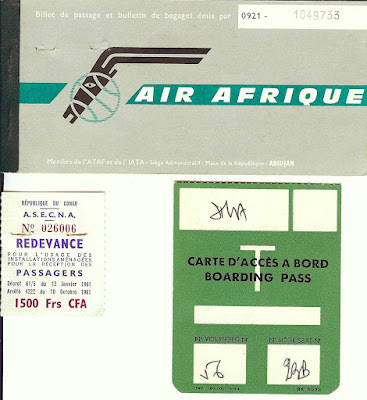 Here is an artifact from early in the life of Air Afrique: an old-fashioned ticket and boarding pass from 1961. While the details of the flight are not shown, the departure tax stub <<redevance>> was issued by the A.S.E.C.N.A. ground agents in the Republic of the Congo, the southernmost member of the Air Afrique coalition—indicating that this was likely departing from either Brazzaville or Pointe-Noire. In those days, destinations were many, mostly neighboring Libreville, Douala, or perhaps N'Djamena or Bangui. The ticket jacket provides the address of the airline's headquarters in Abidjan—perhaps that was the ultimate destination of this itinerary.
No comments:

Air Afrique: The Transatlantic Schedule, May 1980 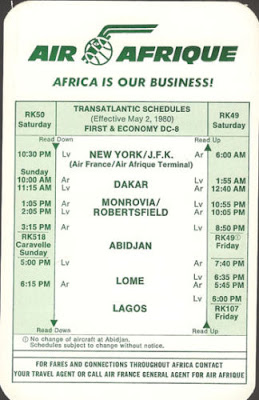 A playing-card style pocket guide to Air Afrique's flagship transatlantic schedule as of May 2, 1980, showing the times for RK49 and RK50 to and from New York-JFK, a once-weekly operation originating in Abidjan on Saturdays, and linking at the pan-regional carrier's other base at Dakar, via Robertsfield in Monrovia, Liberia. Below this, the table shows the services of RK518, which offers a convenient connection to Lome, Togo on a Caravelle. On the lower right, RK107 begins at Lagos on Friday evenings, and connects through Abidjan via Lome, which the notes appear to show uses the same DC-8 that reaches the Air France terminal at JFK the following morning.
No comments: 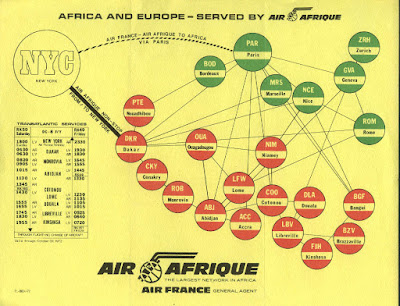 Its been a few years since the Timetablist has held an Air Afrique Week to celebrate one of the greatest carriers in African aviation history. To kick off, here is a glorious example from early in the airline's life; a unique, colorful route map that not only cleverly represents the young airline's complex route system in much clearer fashion than more conventional formats.

To nitpick, it is perhaps slightly confusing just what city connects with what: is that a Dakar—Bordeaux—Paris routing, or Dakar to Paris non-stop? Likewise, it's slightly unclear which schedules are shown between Abidjan—Lomé—Niamey—Nice—Geneva.

The home state cities are in red; European destinations in green; slight size bias is given to Paris. None of these discs are comparable to the megaplanet that is NYC, the fledgling flag-carriers flagship transatlantic service, whose connecting schedule is listed at left: Kinshasa—Libreville—Lomé—Cotonou, which connects to the mainline DC-8 RK50 for Abidjan—Monrovia—Dakar—New York.