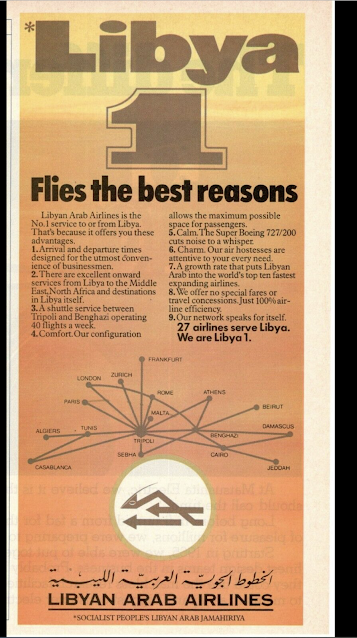 Following on from the previous post, here is a newspaper advertisement for Libyan Arab Airlines from a few years later, which centers around substantially the same route map from 1974, but without the excursion across the Sahara (no Khartoum, Agadez, nor Niamey), with only the addition of Frankfurt, Damascus and Jeddah in the intermittent years, and with Geneva substituted by Zürich.
The map is also, except for Sebha, absent the extensive domestic network—perhaps not provided for this circumstance, which appears to be aimed at the business traveler to the "Socialist People's Libyan Arab Jamahiriya" —"*Libya1 flies the best reasons," it declares, boasting of its 40x weekly Tripoli-Benghazi shuttle service, its "whisper" quiet B-727-200s, and its growth rate. The copy concludes with the emphatic: "We are Libya 1." which isn't precisely grammatically correct.