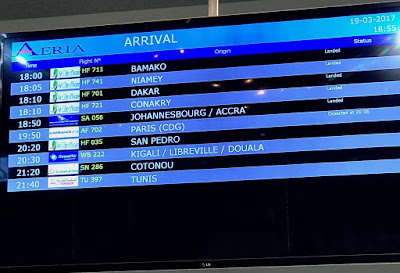 Like the departures monitor shown in the last post, the evening arrivals schedule at Abidjan some weeks back was dominated by hometown carrier Air Côte d'Ivoire, with flights landing from Bamako, Niamey, Dakar, and Conakry in quick succession, followed an hour later by a domestic arrival from San Pedro.

As the time approached 7PM, the longer-range and intercontinental flights from foreign carriers began crowding the modest apron at Houphouët-Boigny International Airport: South African Airways from Johannesburg via Accra (which also stops at Kotoka International Airport on the return leg), then Air France from Paris an hour later. It is this flight, AF702, that is occasionally operated by an A380 superjumbo—one of the few to anywhere in Africa, and currently the only double-decker service between to francophone cities.

At 8:30, Rwandair's flight 222 from Kigali via Libreville and Douala, immediately followed by the Brussels Airlines link to Cotonou. The last arrival on the evening's board is the Tunisair non-stop from Tunis.
No comments: 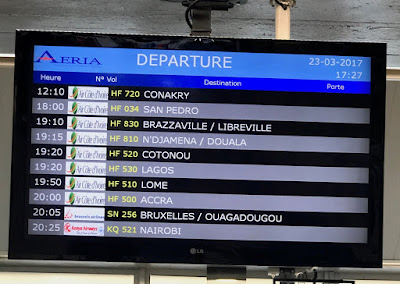 Air Côte d'Ivoire naturally dominates the departures board at Abidjan's Felix Houphouët-Boigny International Airport, the airline's base and the principal gateway to the country. See we see an evening departures list for a 2-1/2 hour window from 18:00 to about 20:30—although the noon flight to Conakry has been massively delayed, it seems.

At the six o'clock hour, one of the airline's handful of domestic operations takes off with a flight to San Pedro, the cocoa port in the southwest of the country, near the Liberia border (first featured on the Timetablist with this post). The 7-8pm block features a half dozen of the airline's regional flights, starting with the longest haul of the HF schedule, to Libreville with onward service to Brazzaville. Fifteen minutes later the flight for Douala leaves, which then terminates at N'Djamena, Chad. Nearer routes take up the bottom of the hour: Cotonou, Lagos, and neighboring Accra and Lomé. From 8 o'clock, the long-haul departures begin for other airlines. Here we see the flight on Brussels Airlines to Zavantem via Ouagadougou, and the non-stop to Nairobi. A little later, the Conakry flight had fallen off the board, and South African Airways SA057 to Johannesburg with a stop in Accra, appeared.
No comments: 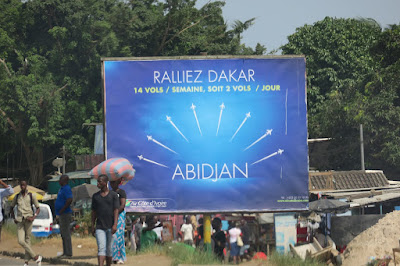 As was the case with the ancient Air Afrique, Air Côte d'Ivoire's most frequent route is between the two major francophone cities of West Africa: it's base in Abidjan and the capital of Senegal, Dakar. The airline runs the route twice per day— that computes to 14 flights per week, as this billboard, one of many copies currently found across the Ivorian capital, helpfully explains.
No comments: 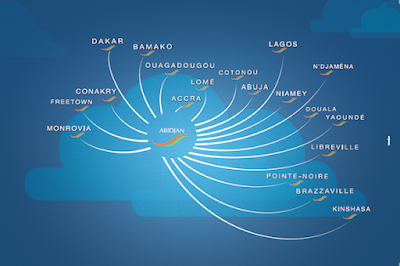 The other intersection of Air Afrique's complex politico-economic network was its base at Abidjan. After the demise of the pan-regional carrier in 2002, Côte d'Ivoire launched a succession of national carriers, first Air Ivoire and today Air Côte d'Ivoire.

Today—particularly with the sad degradation of Arik Air and other Nigerian attempts at a regional, trans-national carrier—this airline is perhaps the most important airline network in the region, stretching not only from Dakar to Douala, but also offering the rare handful of inter-languaphone connections across the English- and French-speaking postcolonial checkerboard of West Africa, with nonstops from Abidjan to Freetown, Monrovia, Accra, Lagos and even Abuja.

Like Air Afrique before it, and in a similar fashion to its only rival to regional dominance, the Ethiopian Airline's backed venture Asky, the Ivorian airline extends well into central Africa, with service to French-speaking Libreville and Brazzaville as well as its coastal oil city, Pointe-Noire, and even as far south as Kinshasa.

However, unlike Air Afrique and its immediate predecessor, Air Ivoire, Air Côte d'Ivoire has yet to launch any service outside of Africa, such as flights to Europe. Despite the volume of traffic between Abidjan and France, it is all taken up by Air France and other metropole companies. Air France/KLM Group's 20% stake in Air CIV likely explains the lack of intercontinental operations.
No comments: 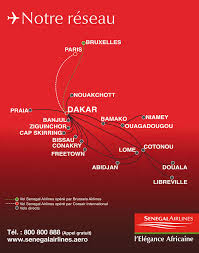 The Timetablist celebrated the launch of Senegal Airlines in 2011, as it replaced the defunct Air Senegal and promised a bright future: well capitalized, with a new fleet, able to take advantage of Dakar's natural position at the far-western tip of the African continent.

Sadly, despite Senegal's continued stability and even growth, the airline lasted barely five years. This graphic, an unhelpfully small file size, is one of the few scraps of the airline's history that remains online. It shows the extent of the airline's ambition, although it is challenging to confirm what was realized: was there ever a secondary hub in Cotonou? Here is evidence that at least the Cotonou—Libreville operation existed. Was either Paris or Brussels ever served? Seems, definitely, no.
No comments: 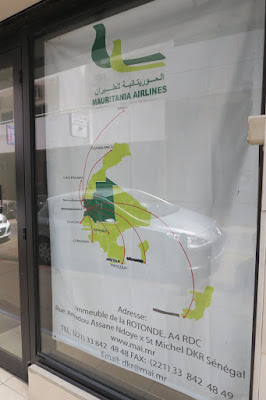 Coming off of Air Afrique Week, the Timetablist back-catalogue is overflowing with examples of the post-Air Afrique era in Francophone West Africa.

Despite the ever-present turmoil of West Africa's airlines—the sad, sudden end of Air Mali in the throes of conflict, then the demise of Gambia Bird during the Ebola crisis, followed by the failure just last year of the once-promising Senegal Airlines venture, and most recently the alarming deterioration of Nigeria's premier carrier, Arik Air—somehow sparsely populated, isolated Mauritania has been able to keep its flag carrier, Mauritania Airlines International, in the skies.

Based at Nouakchott's brand-new Outoumsy International Airport, the state carrier has a small fleet of late-model B737-700s linking to nearby capitals. The route map here, taking up a window of the airline's ticket office in the Plateau business district of Dakar recently, shows a farther reach, such as dedicated routes to Cotonou and Brazzaville, which have, curiously, been crossed out from the map, while Abidjan was crossed out, perhaps by mistake, and then scribbled back in. The routes are not necessarily reflective of actual operations as the Bamako and Conakry flights are normally linked via Dakar, for example.

What remains on the map, although, is not a reality, is the route shown to Paris at the top of the dial, without a shape for France, only existed for about two years. Despite this inconsistency, Mauritania Airlines does reach the European Union by way of its Nouakchott—Nouadhibou—Las Palmas service, in the nearby Canary Islands. Zoueratt is shown as the only other domestic route of this "international" airline.
No comments: