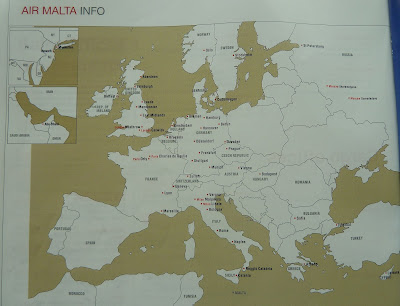 Malta has long acted as a crossroads of the Mediterranean: stage of empires, prophets, and crusades. Today it is a densely-populated, package-tour destination, home to a sizable contingent of Ryanair retirees, and more recently has earned a (dis)reputation as a corrupt tax haven.

All these priorities are reflected in the reach of its long-operating flag carrier, Air Malta. There are numerous links in the eastern Mediterranean: Athens, Istanbul, and Larnaca, and eight airports in Italy, including several that don't see many foreign carriers, like Verona, or the cities on the nearby boot and isle of Sicily: Catania and Reggio Calabria—here making its Timetablist debut.

Likewise, there is an abundance of service to the UK and Germany, true to the island's nature as a holiday-break hub. Secondary cities such as Aberdeen, Leeds, and East Midlands in Britain and Bremen, Dresden, Hamburg, Hanover and Stuttgart in Germany.

Curiously, the map also has small insets at left, with the central portion of the United States East Coast above, and the Gulf below. The former is marked with two destination dots: "Newark" and "Manhattan" while Abu Dhabi is denoted on the latter. However, Air Malta has never had either wide-body, long-haul aircraft nor has it ever served any long-haul destinations, not to the Middle East and certainly not transatlantically. These are surely some sort of code-share designation, but that is not explained; furthermore, unless Air Malta has a partnership with a Helicopter service, in no way does it actually serve Manhattan any more than any other airline, codeshare or not.