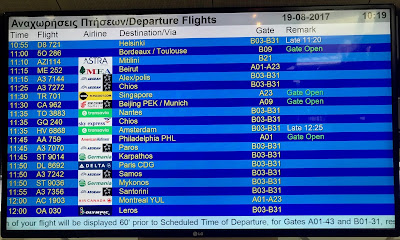 Continuing from the previous post, the departures leading to the noon hour shown on a second screen at Athens International Airport on 19 August 2017. Since the demise of Olympic Airways as a six-continent carrier, the number of intercontinental flights out of Athens is not what it once was, but here we see several of the current long-hauls, with two flights at 11:30 to Asia, low-cost Dreamliner operation Scoot to Singapore, and Air China's triangular routing to Beijing via Munich.
In the other direction, a quarter hour later American's summer non-stop to Philadelphia is already preparing for boarding, while Air Canada leaves for Montreal at noon, a seasonal, tri-weekly flight filled by the many Greek-Canadians who come back to their ancestral homeland. The only other true flag carrier on the board is Middle East Airlines 11:15 hop to Beirut.
Other than European budget operations like Germania, the time block contains the usual smattering of domestic island services on Aegean—almost all operated by Dash-8 props of its subsidiary Olympic, as noted by the "A3 7" flight numbers—to Alexandropolis, Paros, Santorini, and Leros. Smaller domestic enterprises Sky Express to Chios and Astra to Mitlini (Mytlene) on Lesbos.