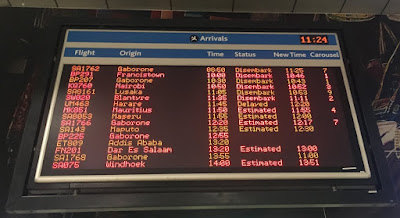 A mid-day Arrivals board for O.R. Tambo from a week or so after the previous posts, showing an all-African schedule at the continent's largest airport. Most are operated by hometown carrier South African Airways, and most flights are from the southern African region; indeed, the schedule represents almost every nation in the SADC league, with Gaborone, Botswana appearing three times, from the first, third, and second-to-last flight. Air Botswana operates that third flight, as well as one before it to remote Francistown.

There are other regional connections from Maseru, in Lesotho, the nation that is famously completely surrounded by South Africa; other nearby capitals of almost every other country that borders South Africa Maputo, Windhoek, Blantyre, and Lusaka flights by SAA, and a rare Air Zimbabwe flight from Harare is unsurprisingly delayed. Further afield, there is the trans-ocean service on Air Mauritius arriving just before noon.  The more distant continental connections are the ubiquitous rivalry of Kenya Airways from Nairobi, Ethiopian from Addis Ababa, and Fastjet from Dar Es Salaam—that low-cost start-up's longest route.
No comments: 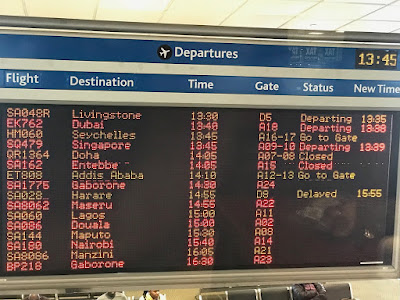 An update of half an hour from the last post: the Asian long-hauls of Emirates and Singapore are delayed, while Qatar Airways is leaving on time for Doha. Ethiopian seems like it may not make it out on schedule, as the gates still open 25 minutes prior to pushback.

Another block of near and far intra-African flights on South African Airways has filled up the 3-4PM block: Maseru, Lesotho; Lagos, Nigeria, Douala, Cameroon, Maputo, Mozambique, Nairobi, Kenya, and Manzini, in Swaziland. After that, an Air Botswana short-hop to Gaborone (see also this post from the previous week).
No comments: 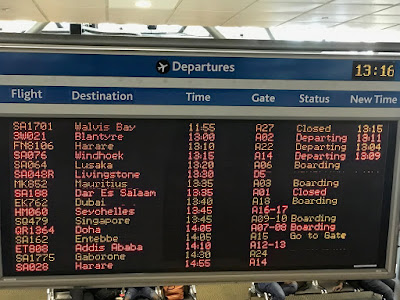 Staying at the southern end of Africa, a schedule of three hours worth of international departures from O.R. Tambo International Airport in Johannesburg, the busiest airport on the African continent. The board is dominated by hometown carrier South African Airways, with flights to Walvis Bay and Windhoek, both in Namibia; Lusaka, and Livingstone in Zambia; Dar Es Salaam in Tanzania and Entebbe in Uganda, as well as the final flight shown, to Harare, about two hours after Fastjet's flight to the Zimbabwean capital.

Staying with Namibia, as from the previous post, here is a floor banner advertisement at the check-in desk of Sir Seretse Khama International Airport in Gaborone, Botswana, seen in August 2017. Air Namibia is trying to make its lemon into a grapefruit, offering a convenient option connecting their own capital and that of their neighbor with South Africa's tertiary city—what is surely still a thin route. Almost all of Gaborone's air traffic routes through the short hop to the megacity of Johannesburg.
No comments: 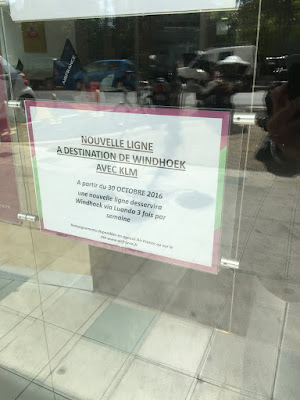 The recent coverage of KLM's long routes plunging down across the African continent to Johannesburg is relevant to this development from late 2016: the somewhat surprising move by the Dutch Airline to extend its formerly-lucrative Amsterdam—Luanda service to Windhoek, Namibia. Here a travel agency in the center of Nice, France, advertises the news with a plain paper printed notice in the shop window just a few weeks after the public announcement.

The service was celebrated as a major development for the country and an opportunity to boost business and tourism traffic. While it does offer an alternative to the relatively few European connections to the famously sparsely populated country, it presents stiff competition to the struggling national carrier.
No comments: 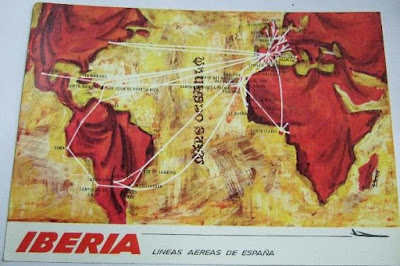 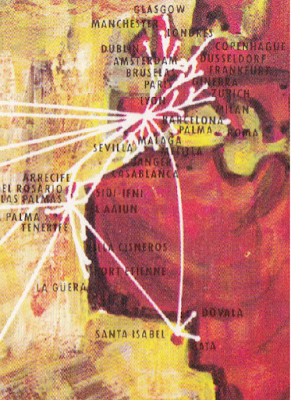 Reminiscent of the mid-century route map of KLM posted earlier this month, this fascinating and somewhat confusing postcard, showing Iberia's entire route system, is dated to 1968 but seems a relic of even earlier years, given its semi-medieval, hand-painted style, especially the Gothic lettering of "Mare Oceanum" set vertically on the spine of the Atlantic Ridge. It is featured for sale at this website.

The anachronism is further enhanced by the curious and highly confusing use of older names for the destinations: Nouadhibou is still shown as Port-Etienne, Dakhla in Western Sahara is referenced as Villa Cisneros, and Malabo, capital of Spain's only sub-Saharan colony, is listed as Santa Isabel, which connected to the metropole of Madrid and the large station at Las Palmas, in the Canary Islands, and which has local links to mainland Bata and to Douala, in Cameroon, which is spelled with a "V" as if carved in marble.

The mysterious is "La Guera" which today can be found almost nowhere on any maps or airline schedules. Friends at Airline Memorabilia note that this was once an outpost in Spanish Sahara, now a ghost town. It is interesting to juxtapose this item with an Iberia route-map advertised twenty years later.

The barbell-style route system is focused, naturally, on Madrid, with feeder routes to the capitals of Western Europe,  and which appears to have non-stops to Rio de Janeiro; the hub at Tenerife likewise has a non-stop to South America, reaching landfall at Montevideo; the network then extends across the southern cone to Sao Paulo, Buenos Aires, Santiago and upward to Lima, then Bogotá, then Caracas, where the route turns back to the Iberian peninsula or up to the Caribbean basin at San Juan. 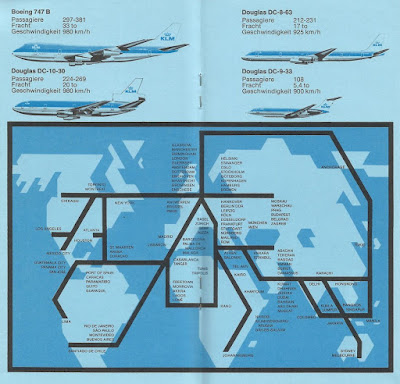 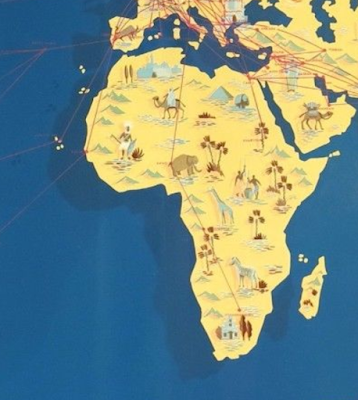 In looking back at the once-prominent role of Kano in trans-Saharan aviation, here we look back at the pre-jet age, when KLM stretched just a few routes across the vast African continent. In this detail from the airline's route map in about 1955, the Amsterdam—Rome—Kano—Brazzaville—Johannesburg spine stretches down the center, a line which was featured far back in the early days of The Timetablist.

In the east, a bundle of routes pin at Cairo, with a single line appearing to run down to Khartoum. On the left side of the map, red lines bunch at Lisbon, where two split off, one seeming to stop at Sal in Cape Verde before heading to the northern coast of Brazil, while a second hugs the mainland, changing course slightly at Dakar, likely for Rio de Janeiro.
No comments: 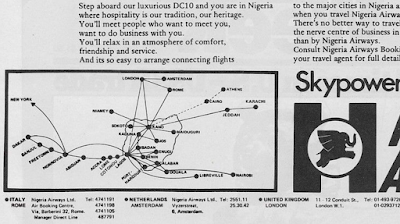 A detail of the previous post, shown the domestic network of Nigeria Airways in May 1979; a barbell system with poles at Lagos in the south and Kano in the north.
No comments:

Nigeria Airways: The Right Connections for Nigeria and West Africa, May 1979 (1 of 2) 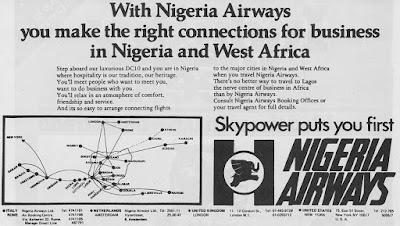 Having now extensively reviewed the myriad airlines of contemporary and recent Nigeria, this New Year's Day we look back almost forty years to the era of the Winged Elephant, when the green-striped jets of Nigeria Airways ruled the skies.

Similar to previous features on The Timetablist, the national carrier was seeking the discerning eye of the Air Transport World reader in May, 1979, boasting of its "luxurious DC10," to "the nerve center of business in Africa," Lagos, but also throughout West Africa, as is helpfully shown in the route map at lower left.

What is today an aviation market arranged around the twin poles of Lagos and Abuja was, before Abuja was realized, organized between the southern hub of Lagos and the northern gateway of Kano, from whence intercontinental flights crossed the Sahara to European metropoles, including Rome and Amsterdam, but likewise eastward to the Middle East; the Kano—Jeddah link was recently revived but in those days the operation had the somewhat unusual final termination point of Karachi. A sort of code share, presumably on Egyptair, linked Cairo—Athens. Note also the cross-border link from Kano to Niamey, Niger.

There was a second non-stop to London from Lagos, but mostly this was the start of the coastal routes along West Africa's edge, Cotonou—Lomé—Accra—Abidjan—Monrovia, where the widebody headed nonstop for New York JFK, while the smaller elements of the fleet linked Freetown—Banjul—Dakar and back in a minihub. There was a nonstop from Lagos to Douala, and also a connection to southeastern Calabar, as well as flights to Libreville and Nairobi.
No comments: