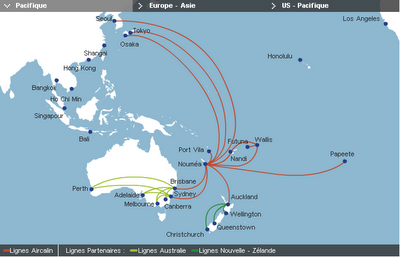 A much sleeker interface greets the visitor to Aircalin's 2011 website, compared to the grainy réseau of just three years earlier, shown in the previous post. The only major addition to the network is Seoul, suggesting the increasing importance of Asian visitors to the archipelago. Wallis and Futuna are shown as separate nodes, showing a link between the two fellow francophone islands.

Beyond this, the carte includes cooperative networks with (unspecified) Australian and New Zealand carriers to other antipodean cities via Sydney, Brisbane and Auckland, demonstrating how easily Aircalin's network can be reached via these gateways. The new map also shows more distant destinations at its edges: Honolulu, Ho Chi Minh Ville, and Hong Kong; Shanghai and Singapour, Bali and Bangkok, and even Los Angeles, suggesting an expansionary eye toward linking New Caledonia with California, and China.
No comments: 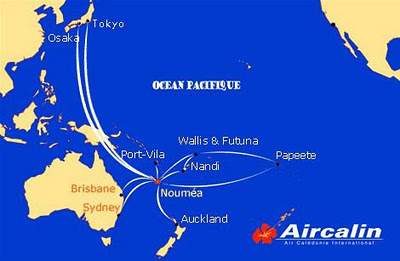 Aircalin, the international airline of New Caledonia, France's largest overseas department in the Pacific, stretched from Auckland and Australia to Asia in 2008 in this grainy .jpg sourced from this website.

Japan saw multiweekly A330 flights to Osaka and Tokyo. More regionally Aircalin linked together the other French possessions in the Pacific, from Papeete, Tahiti, in Polynesia, to tiny Wallis et Futuna north of Fiji, as well as nearby Vanuatu (now independent, once an Anglo-French condominium). The major cities of Australia and New Zealand, primary sources of tourists, were also reached.
No comments: 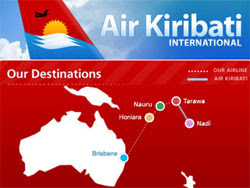 Air Kiribati, for all its loud color, operates but one route, linking the capital with Nadi, the international airport of Fiji. It is partnered with Our Airline, the dull name of the colorful former Air Nauru, which, much diminished from its glory days, manages an occasional run from Tarawa to Brisbane via the tiny island Republic and the Solomon Islands.
No comments: 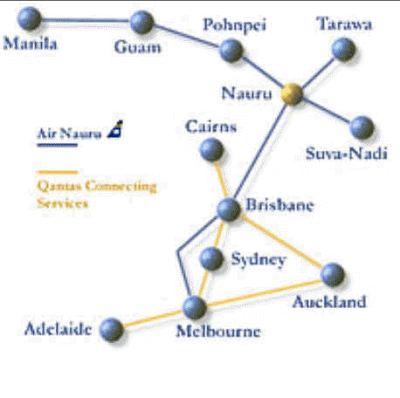 A sketchy .gif pixellation of the terminal Air Nauru system in 2006, its last year of operations, via this website. With a recently-leased B737-400, stretching at least occasionally as far as Manila and Melbourne (although not Hong Kong or Honolulu) and some sort of cooperative arrangement with Qantas (note how Sydney is bypassed), Air Nauru could almost be thought to have been re-peaking from to its previous glory days on the 1980s, when it was the great connecting carrier of the equatorial Pacific. Unfortunately, just mere months after this map was computer-drawn, the single jet was seized by Australian authorities at Melbourne over a tax dispute. Air Nauru was finished.
No comments: 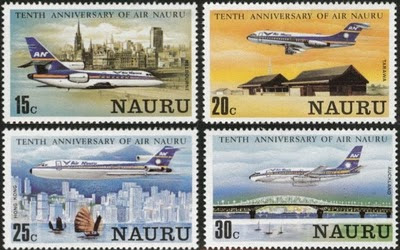 The microscopic Republic of Nauru, with its mere few thousand citizens, has had few indigenous subjects for philately, so its little wonder that the national airline was featured at least once. Air Nauru was in its fully glory at aged ten, fueled by phosphate profits and stretching as far away as Auckland, Melbourne, and Hong Kong, but Japan and Honolulu.

Tarawa, Kiribati was just one of at least twenty Pacific islands that the Boeing B727 and B737 jets touched down on, from Guam to Fiji, Okinawa to Rarotonga, Noumea to Niue. Air Nauru was in many cases (such as Tarawa) one of the few, or only, scheduled services to link these far-flung atolls to the outside world.

The airline's fate sank with that of its nation, as Nauru declined from tiny, wealthy island republic to shady haven for tax cheats and Afghan refugees. The airline declined from a fleet of more than five aircraft to a single jet, which was seized by Australian authorities for unpaid taxes in December 2006.
No comments: 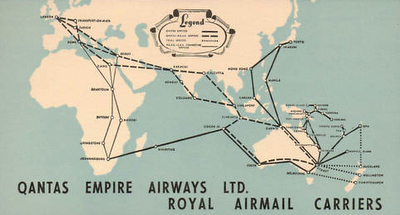 A pre-war route map of the Royal Airmail Carrier, Qantas Empire Airways, Ltd. A somewhat-complex array of route indications, for both the company's own air routes as well as that of other air companies, shows the system stretching to four continents, with the Americas absent. The trans-Indian route to Johannesburg connects with an Imperial spine across Rhodesia, East Africa and the Sudan to Cairo, from where the network merges with routes via India, then crossing Europe to terminate at London.

Closer to home, two northern lines, one touching Hong Kong, the other Manila, bank across the Orient to end at Tokyo. At far right, a web of island-hoppers fan out from Sydney to New Guinea, the Solomon Islands and Fiji, with lines of a different marking running across the Tasman Sea between Sydney, Melbourne and New Zealand.
1 comment: 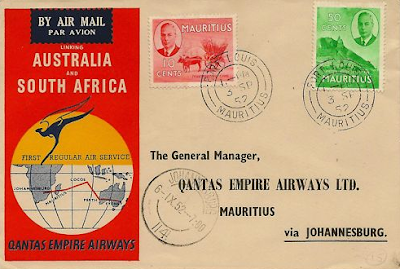 For no particular reason, Timetablist has dusted off a series of Qantas articles.
Here is a 1952 postage commemoration, celebrating the first 'regular' linking of two of the Queen's realms, Australia and South Africa. The Qantas Empire Airways Ltd. route from Sydney crosses the antipodean vastness to Perth, then bounds westward over the Indian Ocean, refueling at the Cocos Islands, and later Mauritius, before landing on African soil at Johannesburg. The envelope is cancelled with Mauritian stamps.
No comments: