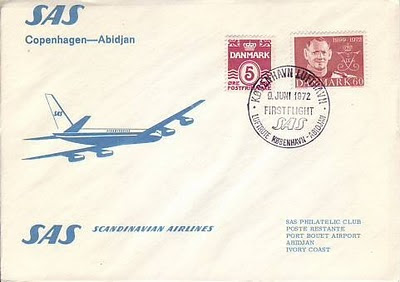 Although monochrome and devoid of detail, this mail is another crisp example of the European first-day cover tradition. The first flight from Copenhagen to Abidjan's Port Bouet, on 6 June 1972, may have been non-stop as there is no routing information on the envelope other than upper-left text and the cancellation stamp, which both only list origin and destination. Its such a shame that the Scandinavian carrier has no routes to Africa to present.
No comments: 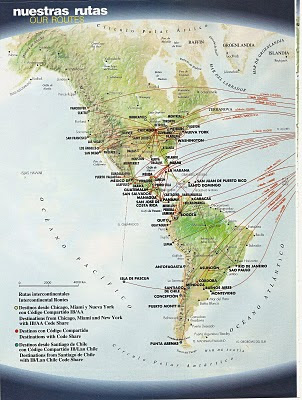 Iberia's Western Hemisphere routes in early 2006 showing, to a fault, its reliance on American Airlines to compliment its transatlantic system, particularly the radiating spokes out of Miami and Chicago. Its surprising that Iberia does not have more US destinations: nothing on the west coast, no service to Washington. Service to Boston's Logan airport has commenced since this time. Its Latin American links are proficient, but not over-abundant.
Over all, this cartography suffers from an extreme over-inclusiveness of code-share routes from American Airlines. This is further complicated by Iberia's historic base at Miami, which facilitated onward connections in Latin America. Its hard to discern among all these red lines just what IB metal serves which cities.
No comments: 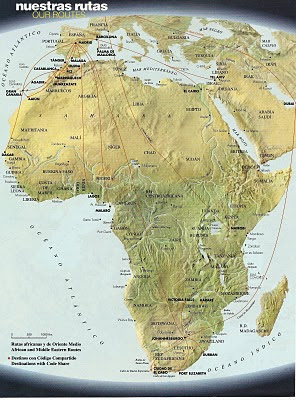 Iberia's eastward system looks slimmer than its 1988 operations, but still connects to Dakar, Lagos, Malabo and Johannesburg in sub-Saharan Africa. Aside from the dense array of Moroccan cities, including the Western Saharan capital of El Aaiun, Iberia is otherwise surprisingly spare on North African destinations: no Algerian or Tunisian cities, for instance.
No comments: 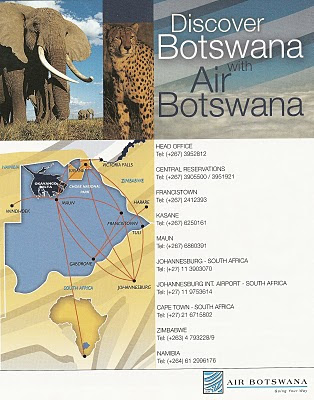 Air Botswana is, by dint of its homeland's small population, a tiny airline with only regional aircraft. Its furthest destinations are Windhoek, Harare, Cape Town and Johannesburg, at least as of the 2006 advertisement shown here. But given how complimentary most reporting is of Botswana as Africa's little miracle, its surely a lovely carrier. Note that it seemingly has more routes out of Maun, the gateway to the Okovango Delta tourism region, and Johannesburg, than out of its capital, Gaborone, which is reportedly close enough to the Gauteng that driving is easier.
No comments: 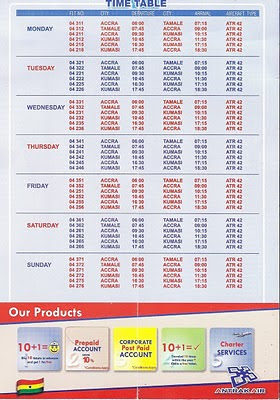 Antrak Air is an under-publicized regional carrier based in Accra, Ghana. This shows the domestic schedule shows the weekly departures to Tamale and Kumasi. Its only a shame that their route to Ouagadougou, Burkina Faso isn't currently running.
No comments: 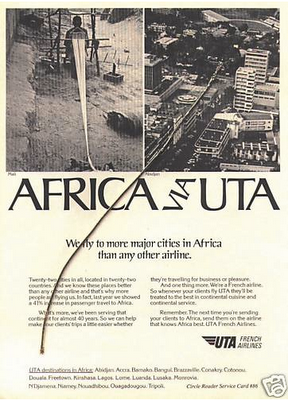 UTA French Airlines was one of aviation's more unique carriers: from its eggplant colored airplanes to its roster of destinations-- if you saw one its widebodies, you knew your were someplace exotic (or maybe just in Paris). Its really a shame UTA didn't survive, its individual spirit has never been matched by any other intercontinental carrier since. One question on the advert: did it really serve Nouadhibou, Mauritania's secondary port and surely one of the most remote cities in the world, and not its capital, Nouakchott? Can't stop admiring the curious carrier; its a shame its reputation didn't survive the 1989 Bombing.
No comments: 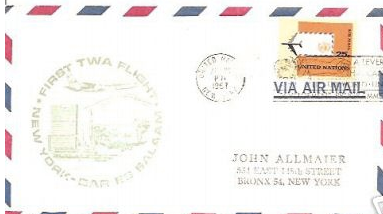 Its somewhat incredible to contemplate that in several decades ago, not one (Pan Am) but two (TWA) U.S. carriers departed New York for East Africa. It would take some research to determine just how long this route lasted, but it seems to have routed via Rome, Athens and Cairo variously, stopping next at Entebbe and then on to Nairobi and terminating at Dar Es Salaam.
No comments: 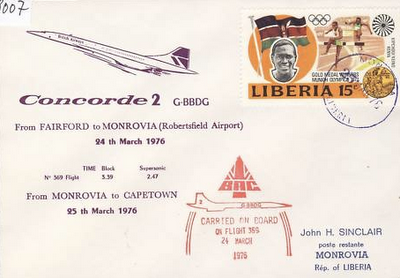 25 March 1976 must have been quite a day at Roberts International Airport: likely the only time in Liberia's history that it was visited by a supersonic jet (although the craft was not unknown in West Africa, as Air France was known to run a Paris-Dakar-Rio de Janeiro service). Its not clear from this jubilant cover whether passengers were even on board, much less if any deplaned at Monrovia. From the red cancellation stamp, it suggests that it was a corporate test flight for the British Aircraft Corporation (BAC).
No comments: 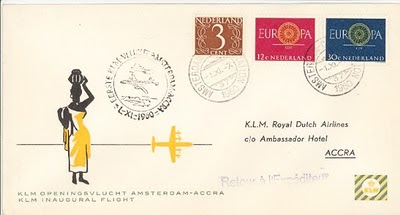 A typically colorful first day cover from KLM in 1960, although a bit dull (the woman with the basket on her head could easily represent any African destination) considering the significance of the Amsterdam-Accra flight. This route holds a particular importance for both countries: it can easily be forgotten that, although the Gold Coast was a British Crown Colony at independence in 1959, it was the Dutch that held the area for the longest period of time, and other than South Africa, Ghana is the closest to an African territory that the Netherlands ever had. The Dutch imprint is still with Ghana, most visibly at the high-end Golden Tulip hotel in the center of town (with another property in Kumasi) and the nearby Royal Netherlands Embassy, arguably the most gorgeous modern building in the country. The KLM flight also has particular importance in Ghana's gold exports; each KLM jet is reportedly loaded with bullion.
No comments: 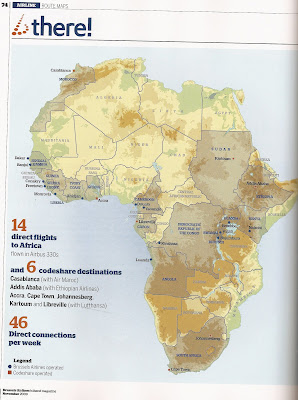 A page from this past summer's Brussels Airlines Spirit Magazine, showing its 14 African destinations, which it inherited several years ago from the estate of the old Sabena. Brussels Airlines is a curious carrier, a small, quiet airline in Europe, with no transatlantic routes at the time, but a dominant carrier to Africa, serving more cities on the continent then almost any other intercontinental operator, and the major connection between such cities as Kigali, Kinshasa and Monrovia to overseas destinations with its handful of A330s. The result is almost a feeling of an airline-within-an-airline, especially given Brussels Airlines's small fleet of regional aircraft spread out among the terminals at the half-empty Zaventem National Airport, with one end of terminal A, the so-called "T" gates, screened off from the rest of the departures hall by an extra passport control: this is one of the principal gateways between Europe and Africa.
No comments: 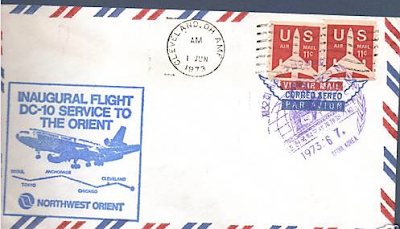 Its not entirely clear what to make of this; its celebrating a route that began June 1973 from Cleveland to Seoul via Chicago, Anchorage and Tokyo. The question is, could one really board a Northwest Orient DC-10 at Cleveland Hopkins airport, and not deplane until reaching Kimpo? If so, this is a wonderful, overlooked triumph of Cleveland's aviation history. But it is also entirely likely that the service included a "change of plane" and was really just another connection through a hub. It is true that both United and Northwest used widebodies to connect to Cleveland; United used a DC-10 to shuttle Monday morning commuters from Hopkins to O'Hare up until the 1990s.
No comments: 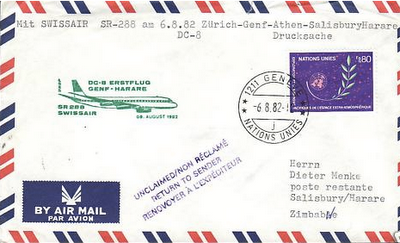 A first-day cover from 6 August, 1982, when a Swiss DC-8 first departed Geneva for Harare via Athens only, if the typewriting at the top of the envelope is reliable. By the way, looks like this particular article made a roundtrip?! Note the return to sender notice.
No comments: 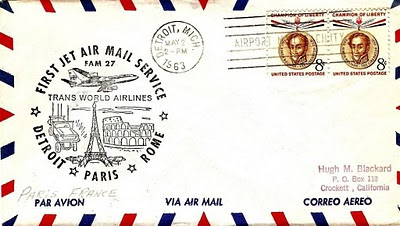 Not certain just what to make of this: Was there really a 1963 non-stop Detroit-Paris on TWA, which went onward to Rome?
No comments: 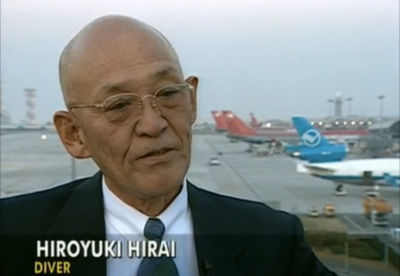 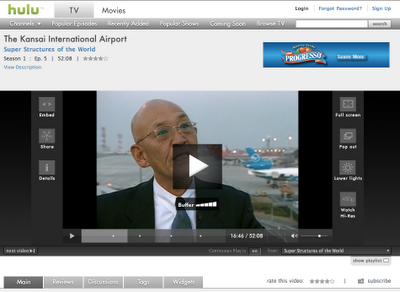 Sometimes evidence for erstwhile air connections is only uncovered in uncommon sources. Here are a few still frames from a 1998 episode of the series Superstructures, viewable on the excellent online video service Hulu. The man interviewed is discussing the trials of constructing the massive off-shore island airport (doesn't he seem a bit senior to be on a construction diving crew?)
Unmistakable in the immediate background over his left shoulder is a VASP MD-11, undoubtedly destined for Sao Paulo, perhaps via Los Angeles or San Francisco. VASP is a Timetablist favorite; there is something romantic about Sao Paulo being so leviathan that it had its own airline. Like seemingly 9 out of 10 Latin American carriers, it did not survive to the present day (see Lloyd Aero Boliviano, VARIG, Transbrasil, Viasa, etc).
In the far background of the above frames, you can see at least Northwest Airlines widebodies in bowling-shoe livery. As can be imagined, the 53 minute video is loaded with planespotting from a certain vintage, including previous United, Finnair, and Austrian paint schemes. Some of these, such as Austrian, have dropped service to Kansai/KIX-- there appears to have been something of an opening buzz about the place which fell away as the years went on.
No comments: 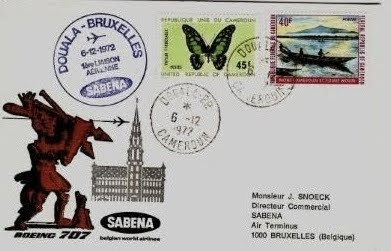 In the early 1970's, Brussels Zaventem Airport much have been quite busy, with so many jets departing for Africa. Here we see a first day cover from December 1972, a Sabena B707 to Douala. Not sure what the fellow to the left of the Hotel de Ville is doing.
No comments: 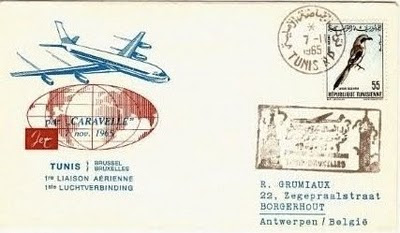 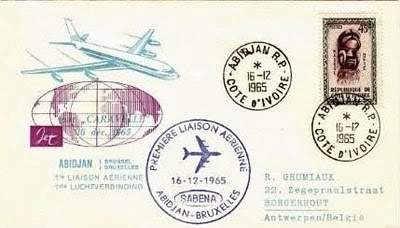 A dynamic-first day cover, celebrating Sabena's jet service to Abidjan in December 1965. The mark says Caravelle but the model is decidedly a B707. Brussels Airlines still routes through Abidjan today, on a Brussels-Monrovia-Abidjan vv. triangulation.
No comments: 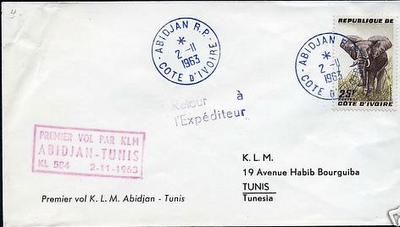 A vintage first-day cover from November 1963, showing that KLM, like the rest of Europe's flag carriers, flew to Côte D'Ivoire, apparently via Tunis for a time. British Airways and Lufthansa have also stopped visit Felix-Houphouët-Boigny Airport, but Brussels and Air France still stop there.
No comments: 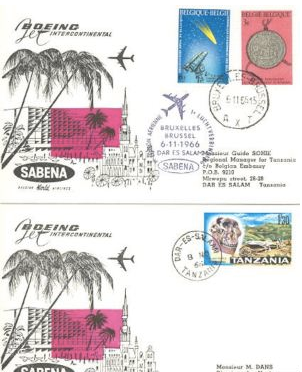 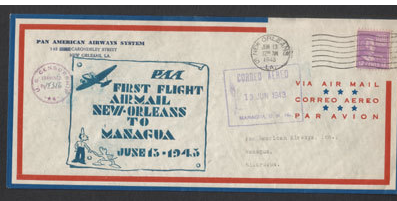 Speaking of New Orleans's international service, here is a relic from June 13, 1943: Pan Am from New Orleans to Managua. Long before it was overshadowed by Houston, Atlanta, and even Memphis, New Orleans was a major gateway to Mesoamerica, as this attests.
No comments: 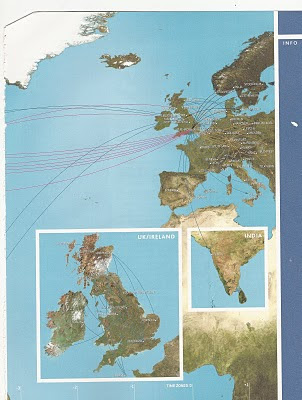 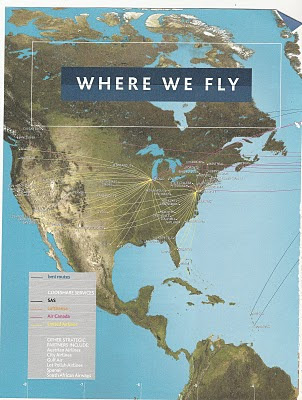 Speaking of Carriers other than BA, here a route map more contemporary to our Google-earth era: BMI's global reach in early 2006. The Washington-Dulles route had already failed, but the Chicago route was still alive, as was the reach to Las Vegas. Also the Caribbean routes, and in the eastern Hemisphere, the Mumbai run. None of these are currently active. BMI is currently serving a few dozen cities in Africa, such as Freetown and Addis Ababa, and the Near East, everything from Baku, Beirut and Bishkek to Saudi Arabia. But no transatlantic routes.
No comments: 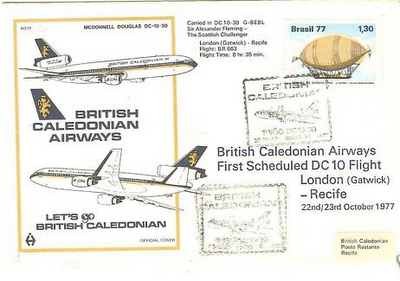 British Caledonian had an interesting history, as evidence by its lengthy, detailed Wikipedia entry. It had to contend with its giant rival BOAC/British Airways (and by extension, the UK government, both its regulator and major BA shareholder) for route rights; a similar sort of competition can be seen more recently with BMI's ventures in Saudi Arabia and Sierra Leone, Azerbaijan and Asmara. BR itself was absorbed into the BA behemoth in the 1980s.

This handsome graphical first day cover celebrates a Gatwick-Recife service, a DC-10-30 plunging southward in 1977 (curious to know how long this lasted).

This is but one example of how British Caledonian lifted the celebratory first flight cover to new heights of art form and informational presentation. There's no way Timetablist can compete with the substantial and beautifully-presented British Caledonian Tribute site's FCC page, which shows the airline spent 1977 using its new DC-10s to extend to Sao Paulo, Santiago, Houston, Los Angeles, Lagos, and Algiers. 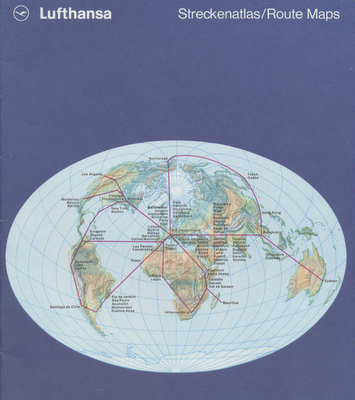 This sharp web is a unique delineation of the standard route map that Lufthansa employed in its Streckenatlas for many years. City names are clustered together where possible, and the red lines themselves only vaguely suggest the actual flight paths,
The resulting Anchorage-Germany-Bangkok trigonometry at the center is lovely; but in other areas it is a bit confusing. For instance, were there really three paths from Germany to Santiago, and two separate flights that terminated at Johannesburg?
Its interesting to examine the list of Near-East cities (Kuwait, Jeddah, Dhahran) common in the day, where popular contemporary way stations (Abu Dhabi, Dubai, Doha) are absent. Also, note the lack of Sunbelt Cities, only Los Angeles is served outside of the Northeastern US.
No comments: