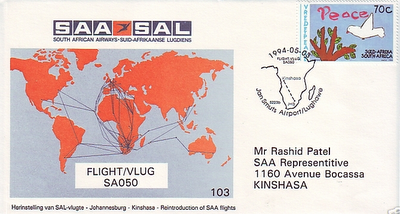 Although two years after the issuance of the envelope in the previous post, this item still sports the apartheid-era Nassau Orange and Navy color scheme, and uses only South Africa's European languages. Sent in the same year as the election of Nelson Mandela, the purpose of this envelope was instead to celebrate the reappearance of South African flights on the continent of Africa itself, much of which had been off-limits due to anti-apartheid sanctions.
Although the service to Zaïre was the focus of this cover, the better part of the paper is taken up with a full, worldwide route map, showing SAA/SAL's trans-Indian services from Mauritius to Perth and Sydney, as well as Hong Kong and Taipei; a fascinating Rio de Janeiro focus city, linking New York and Buenos Aires to both Cape Town and Johannesburg; the service to Houston; and a dense interweave of lines around West Africa and across the Sahara to a multitude of European cities.
Without labels, its unclear what stop-overs were employed on these services, and what angles on the map are merely changes of direction, not pit-stops. This is especially the case as much of the continent had still not reauthorized the presence of the airline (note the pin balling of the route in and out of Abidjan, and the routes skirting around Madagascar). It seems certain that Europe was reached from a variety of refueling stations from Cape Verde and Canaries to Kano, Khartoum and Cairo.
No comments: 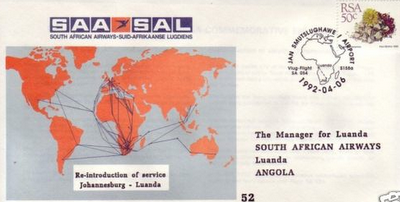 The re-introduction of intra-African services by South African Airways coincided with the gradual dismantling of the apartheid state, which culminated in the county's first democratic elections in 1994 (and would, years after that, see the airline shed its Orange-and-Blue color scheme and Afrikaaner initials). Prior to this, SAA had to skirt around jurisdictions, especially in Africa, which banned the carrier from operating in protest of the racist regime.
While marking the occasion of the return of Luanda, Angola, to the network, the airline's entire route map is displayed on the better part of the envelope. This reveals a cat's cradle strung around West Africa, and fanning out from Cape Verde to a host of European cities, as far inland as Vienna and apparently also including Manchester. Looking east, the airline apparently had to dodge Madagascar, and stop at the Seychelles before reaching southeast Asia, and the Cocos Islands before landing on the Australian continent.
A very similar map is provided two years later and shown on the next post.
No comments: Stung by the anti-apartheid action of the 1980s, which placed severe limitations of serving or even flying over much of the world, SAA/SAL had still managed to reach near and far. Yet by 1990, the new administration of F.W. DeKlerk had already announced the intention to reform and eventually dismantle the racist laws of South Africa. In response, the country's neighbors opened up their air space and landing strips.
This service sees Durban, Natal, as the 3rd SAA gateway to points in the Indian Ocean, in this case Madagascar (although the envelope is addressed to Mauritius).
No comments:

Only a tiny fraction of the world's intercontinental flights stay south of the equator. Here is one such route, celebrated on a 1990 envelope for 21 years of service: Flying down to Rio (or at least laterally across the ocean) from Johannesburg.
"Bridging the South Atlantic" the anniversary envelope states, with a profile of Christ the Redeemer atop its verdant Carioca hill, and the two continents outlined in white. The route line shown is surely wrong, however: antipodean flight paths bend toward the South Pole, not the North.
Few specifications about the flight are provided, as this is not marking an inaugural service (or, for that matter, even a round-number anniversary). The cancellation stamp suggests that a widebody twinjet was employed-- the A300 was the only such aircraft in the SAA/SAL fleet in 1990.
Today, SAA still serves Brazil, but now breezes past Rio to land at Sao Paulo.
No comments:

South African Airways: Round the Bulge to Europe, 1988

A bizarre supremacist celebration: the 25-year anniversary of West African states barring the flag carrier of White-imposed racial segregation on the African continent from using their air space-- but celebrated not by the enforcing bloc of nations, but by the embargoed state and its carrier.
A B707, which may be included to indicate the original bulge-buster, and perhaps not in use by the late 1980s, is shown over a map with routes originating from Johannesburg and Salisbury (note that it had long been renamed Harare by the Mugabe government in 1982, an appellation that the white SAA/SAL management apparently refused to concede) connecting to both Luanda and Brazzaville, before exiting the African mainland to skirt Cap Vert, refueling at the Canaries, and landing in Europe at Lisbon. From there, the routes split into four branches: east across the Med, northeasterly to Zurich and Frankfurt, and north to Paris and London.
This is a much more extensive European array than today, when SAA is unrestricted by anti-apartheid legislation (and has much longer-haul aircraft).
No comments: 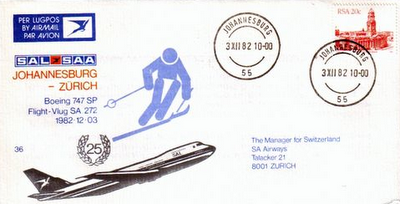 Although 1982 was not an Olympic year, that could easily be misinterpreted when looking at this sporty Alpine celebration. A long, graceful B747-200B, surely not the stubby SP version that SAL/SAA was famous for, and which is noted was in use here, gains altitude after take off, meeting up with a large shadow-figure skier, the askew angle of its skis parallel to the lifting fuselage of the jumbo jet. The white envelope is both an overcast Mittel-Europa sky and a pure-powder ski-slope. Add to this main pair the several iterations of the leaping wingéd springbok, and the envelope is all the more dynamic.
Its unclear if the "25" surrounded by Olympian garlands is for sport, or to mark the quarter-century anniversary of SAL/SAA at Kloten. Either way, modern-day SAA does not serve Switzerland any longer.
No comments: 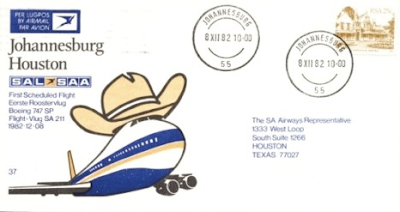 The mash-up of an apartheid era jumbo jet donning a cowboy hat could only mean that the state carrier of South Africa was landing in Texas. In 1982, SAA (which at the time also went by its Afrikaans-translated initials, SAL) undertook an ultra long haul, B747SP service from Johannesburg Jan Smuts to Houston Intercontinental.
However, the wingéd Springbok's lengthy leaps to the Lone Star state would be short-lived, even without the effects of the 1986 Anti-Apartheid Act of Congress that banned all South African carriers from the United States. SAA would return later to American shores, migrating slowly northward from Miami and Ft. Lauderdale to Atlanta and finally settling on the Star Alliance superhub at Washington Dulles.
No comments: 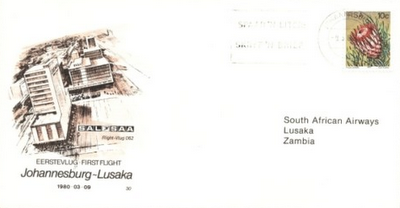 No aircraft are shown or mentioned on this first day cover, yet the dynamic thrill of flight is evident in the pencil-drawing perspective of the tower blocks of Lusaka, Zambia, which South African Airways first reached in September, 1980 and seems to be of the artist's hand that rendered Cape Town and Frankfurt that same year.
No comments: 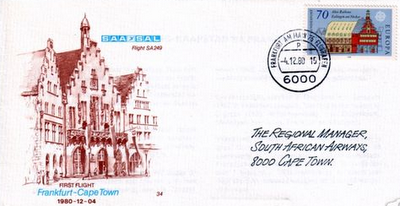 The first flight to Frankfurt from Cape Town came in December 1980, accompanied by this pair of envelopes. Like the Jo'berg-Taipei launch, each of the two dedicated to one cityscape. At top is a dramatic aerial view of the breathtaking Kaapstad, set amidst the mesas of the Cape of Good Hope. The gabled roofs of Frankfurt's Altstadt are featured in brick red on both the graphic and the stamp's illustrations of the second envelope.
No word on stopovers or aircraft. Cape Town in still connected to Europe by several carriers, but SAA's only route from Good Hope is to London. It serves Star Alliance fortress hubs of Frankfurt and Munich, but from Johannesburg.
No comments: 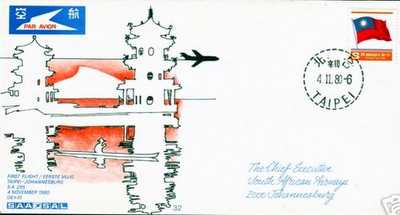 A pair of November 1980 envelopes celebrating the linking of Johannesburg with Taipei. The Hillbrow Tower appears again as Jo'berg's symbol, this time shadowless in front of a colored-penciled blue African day. The Taiwanese example contrasts with a red-orange Oriental dawn behind a pair of pagodas. In both, a black jet streaks across the scene towards the stamps, away from each country's air mail mark.
Today, Hong Kong is SAA's only destination in East Asia.
No comments: 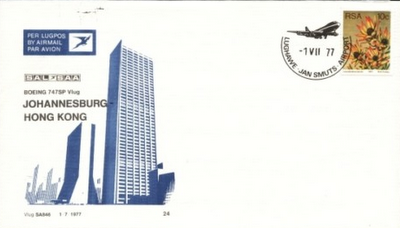 While Hong Kong may be world famous for its massive skyline, it is the soaring skyscrapers of central Jo'berg that are celebrated in this dynamic first-day graphic. The sister blocks of the then 5-year old Carlton Centre soar blue into the white sky: the office tower, the tallest in Africa even to this day, and the upside-down Y-shaped hotel (now abandoned) behind. In this case, no 747SP is visible above. However, a Boeing on final approach centers the cancellation stamp, which uses a Roman numerals for months--a rare style.
No comments: 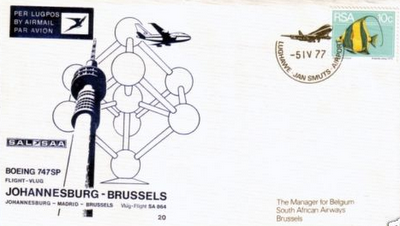 The year 1977 saw a major redesign of South African Airways' first flight cover, which was used at least twice that year, as shown in this and the next post. Less colorful, yet more dynamic than before, SAL/SAA's new Star Wars-era envelope graphics show the blunt profile of the airline's renown B747SP soaring across a shadowless outline of Brussels's futuristic landmark Atomium, paired with the soaring height of Johannesburg's Hillsbrow Tower. Madrid, the first European stop of this new service, (according to the printing), apparently lacked a sufficiently space age skyscraper to be celebrated in the scene or given the boldface headline in the announcement.
No comments: 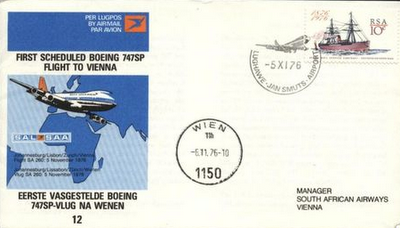 Just a few months after the launch of the Abidjan-Mediterranean hopline from the nearly-identical previous post, South African Airways inaugurated a second service to Lisbon, in November 1976.
Instead of staying in southern Europe, or stopping in West Africa, the B747 emblazoned with the winged springbok headed to the Alps, landing at Zürich, before terminating at Vienna. Neither city is served by modern-day SAA.
No comments: 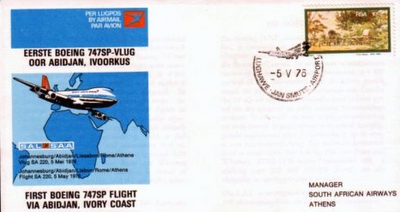 A South African short-jumbo stops in "Ivoorkus" on its way to southern Europe in May 1976. Note that, as with the previous post, a blue map is matched a predominant Afrikaans inscription.

Its somewhat surprising that SAL/SAA would find passengers disembarking at either Lisbon, Rome, or Athens-- perhaps this is why all three were linked together in a single flight plan. This is especially so as the airline has long-since stopped flying to most of its former European destinations, including Paris and Amsterdam. Even if SAA were to return to more European airports, such circuitous constellation of stops will surely never be repeated.
No comments: 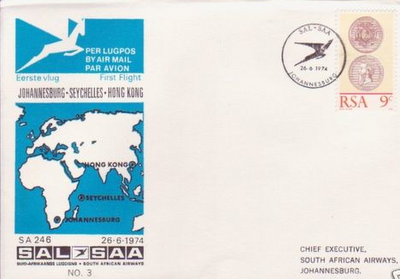 South Africa's state carrier alights to Hong Kong, with a stop in the Indian Ocean, commencing in 1974. The wings of SAL/SAA's classic springbok emblem beam like searchlights from its back and crown at the top of the graphic (a more ordinary version of the mark is seen on the cancellation stamp). The routing is absent from the map on the left of this first-day cover. Afrikaans is put in front of English on the envelope, two decades before the indigenous Zulu and Xhosa languages would come to prominence in a post-apartheid society.
No comments: