Emirates: from Birmingham to Dubai, to the World. 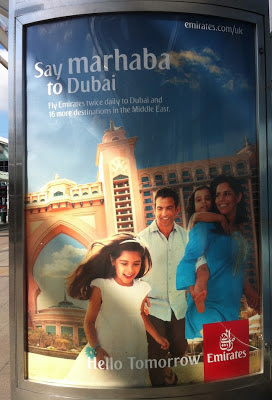 Surely the pride of Birmingham aviation, even more so than Turkish Airlines, is Emirates, dutifully touching down every day with a respectable B777, non-stop from Dubai. Equally reliable is its blanketing of advertisements, such as this eye-level glossy, one of a series that adorns each column of the terminal forecourt. A family of indistinguishable origin glides joyfully in front of the Atlantis Hotel on the Palm. All that Birmingham could possible hope for is to have the route permanently upgraded to a superjumbo.
No comments:

Turkish Airlines: From Birmingham Ten Times A Week, May 2013 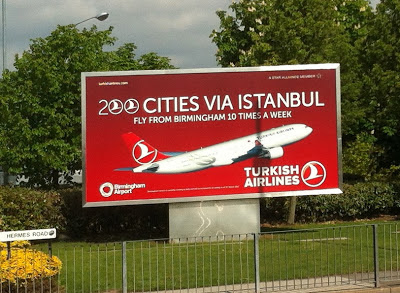 Continuing from yesterday's post: the Hermes Road circus, a confusing roundabout connecting the forecourt of the Birmingham airport with a weave of motorways, features several billboard advertisements customized for the Brummie air transport consumer.

This bright-red advert catches the eye before the turn-off for the terminals, boasting of Turkish Airlines 10x weekly non-stops to Istanbul, from whence the rapidly expanding carrier, following a Gulf super carrier model, links to hundreds of other destinations. Turkish provides one of the few services outside of Europe to Birmingham, one of the few non-European carriers touching down in the West Midlands. However the long wide body A330 gliding across the ad is not seen at BHX. Instead, Turkish uses a much smaller Boeing 737.
No comments: 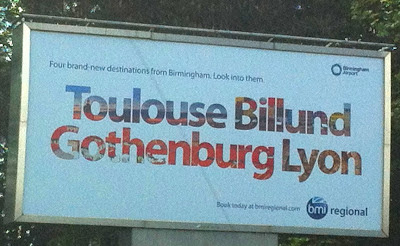 A lazy snap of a billboard at an airport roundabout; that peculiar zone of travelers and their company, heading to and from the aerodrome. Surely the intended audience already has their passage arranged? Maybe next time.

In this case, Birmingham International, whose glory days of flag carriers and intercontinental widebodies are distant, but which still hosts a variety of carriers to points across Europe, and a few beyond.

Here, BMI Regional, that remnant rump of the erstwhile international carrier, British Midland, is actually expanding, even as its long-range flagships have been absorbed into the fleet of British Airways, which no longer flies to Birmingham at all. Britain's great industrial metropolis is now linked to a rather random foursome of short-haul hops to Scandinavia and France: Billund, Denmark, Gothenburg, Sweden, and Lyon and Toulouse in southern France. Brazilian regional jets do the journeys.
No comments: 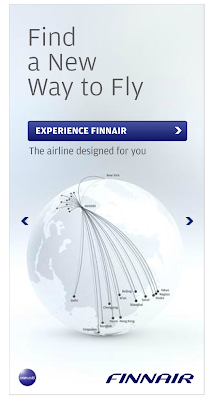 Few carriers in the world have turned their geographic lemons into lemonade as Finnair, whose dominant strategy in the last 10-15 years has been to look beyond its own tiny home market to become a dominant carrier between Europe and the distant destinations of Asia. This began in the late 1990s with succesful runs to major mixed business/leisure hubs from Tokyo to Hong Kong to Bangkok and Singapore. Today, this includes a daring strategy to link second-tier mainland Chinese cities, such as Chongqing and Xi'an, with little Vantaa Airport in Helsinki, spanning Eurasia by linking European business centers with emerging megacapitals of the Far East, which later this year will include Ho Chi Minh City but was curiously unsuccessful in reaching Guangzhou.

The map above, an eye-catching global map from a web banner ad, shows 13 long-haul non stops. Also helpfully, and perhaps a little hopefully, the map shows the link to New York, suggesting a JFK to Japan journey via Scandinavia.
No comments: