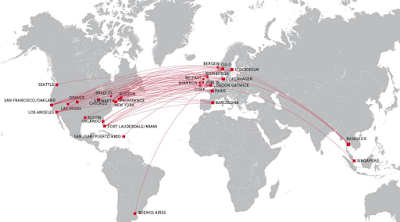 It is by now obvious to remark that the world's aviation market is now at the dawn of a golden age of low-cost long-haul flying. While largely pioneered in parts of Australasia, the fast-expanding boom is currently focused on the North Atlantic market, led by the seemingly now-ubiquitous Norwegian Air Shuttle.

From its first B787 deliveries, the airline has forayed far and wide, first to Fort Lauderdale and New York JFK, then Bangkok. At the beginning of this year, the young but well-funded airline shocked the Northern Hemisphere with the sudden announcement of a huge capacity increase, made possible by the arrival of brand-new next-generation B737Max jets. Norwegian paired off six northwestern European cities: Belfast, Bergen, Cork, Dublin, Edinburgh and Shannon, with three New England airports: Hartford, Providence, and, most surprisingly, Stewart Airport in suburban Westchester County, New York. As can be seen above, the map is now to crowded to follow each individual route line.

Further complicating comprehension, this route map also has almost as many future destinations as current operations. Over the next twelve months, the ever-growing fleet of red-throated Dreamliners will take to the Scandinavian skies to reach a further four U.S. airports: Austin, Chicago, Denver and Seattle are all scheduled before summer 2018. Norwegian also continues its Southeast Asian expansion with the addition of Gatwick-Singapore in September, going head-to-head with aviation's biggest players in a highly competitive corridor.

That flight will not be the airline's only super long-haul out of Gatwick. Within the same time frame, Norwegian will also reach its first South American destination, Buenos Aires, from Gatwick. A rather unexpected venture, the route is especially noteworthy not only as Norwegian spreads to yet another continent, but that the airline already has a long-haul base under development at Barcelona, where IAG's brand-new LCLH Level is flying to Buenos Aires, which, furthermore, is in direct competition with legacy flag carrier Aerolineas Argentinas, one of that once-great carrier's few remaining European destinations.

With industry observers already questioning the Norwegian's rapid long-haul expansion and its business practices in general, we'll have to see if Norwegian can really maintain these routes, much less continue its global domination.