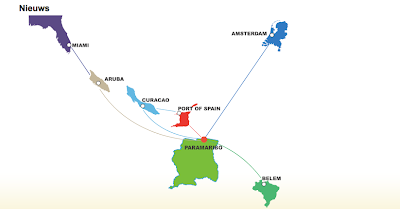 A colorful constellation of countries and constituencies shows the recent extent of Surinam Airways's routes. For certain the geography is not to scale, as tiny Curaçao is more massive than giant Brazil, and the compact Netherlands is as large as Florida. Belem is shown nearly as far away as the distant Dutch home country. A similar version shown on Flickr shows neighboring Georgetown, Guyana.
No comments: 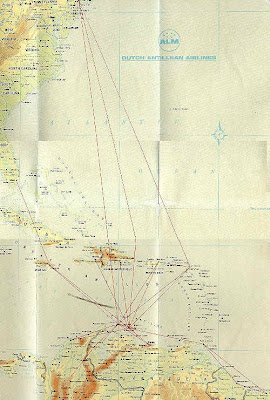 Via this Dutch Caribbean website comes this vintage route map of ALM Antillean Airlines. The image is undated but does not seem to be contemporary with the end of the little airline's life in 2001, so could be from anywhere between 1985-1995, although the airline had its origins in 1964.

The "Dutch Anitllean Airlines" logo sits over the mid-Atlantic ocean, the same light blue as the nautical  labels and coordinate lines. The airline's routes spoke outward from the ABC islands, with three separate services to New York, one via St Maarten, and two to Miami via Kingston, Jamaica. Port-au-Prince, Santo Domingo, and San Juan are also served.

These tiny Dutch constituencies hug the massive South American coast, and likewise ALM's routes seem to skirt around the territory, particularly the southeasterly service which terminates at the Dutch-speaking Paramaraibo, Suriname, via Port-of-Spain, Trinidad and Georgetown, Guyana. Other, shorter routes pierce the mainland, linking major Colombian and Venezuelan cities with the airline's home airports, Queen Beatrix International in Aruba and Hato International Airport at Willemstad, Curaçao. 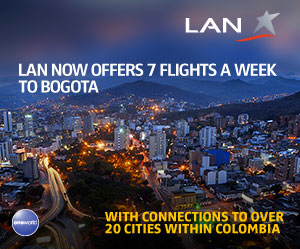 LAN, originally a Chilean carrier, has now become the dominant airline of all of the Latin America. This web ad markets its Colombian Division, with daily flight to Bogota. Clicking the link takes you to a dedicated section of the website, showing convenient connections from Miami to twenty Colombian cities via Bogota, including Barranquilla, Cali, Medellin, and others: 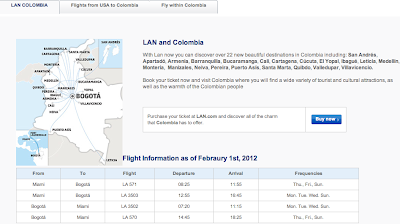 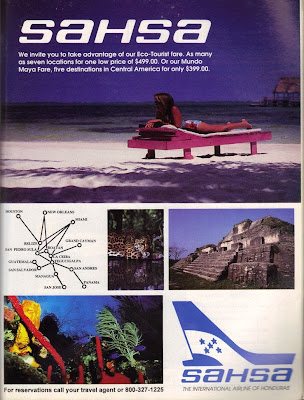 One of the member carriers of Grupo TACA is the International Airline of Honduras, SAHSA, shown here in a lucid advertisement from late in its independent life. There are as many routes out of the Honduran resort of San Pedro Sula and the Belizean cities as there are from the capital, Tegucigalpa. Houston, New Orleans, and Miami are the US gateways, and the airline flew as far south as Panama. Interestingly, there is no service to Mexico City or Cancún, although there was a flight from the Caribbean resort town of La Ceiba to tiny, Anglophone Grand Cayman. This service, along with flights to New Orleans, did not survive the rebranding into TACA.
No comments: 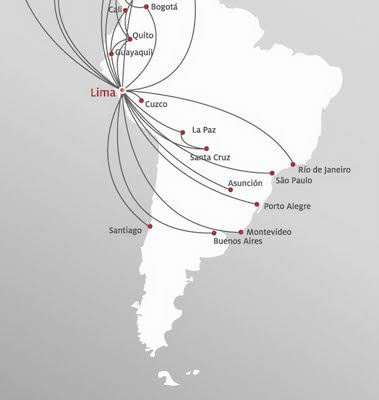 No corner of the globe has undergone such a radical re-alignment of aviation interests than Latin America, in which all but a handful of state carriers and private operators (not least including VIASA, VASP, Transbrasil, VARIG, Lloyd Aero Boliviano, Ladeco, Ecuatoriana, Aviateca, NICA, and Sahsa) have disappeared. In addition to the asphyxiatingly ubiquitous LAN Group, and a variety of promising mainline start-ups and a plethora of low-cost ventures, South America is now territory covered by Grupo TACA, through its 1999 merger with Avianca.

That marriage included the rebranding of a unit based at Lima, formerly known as TransAm but now operating as TACA Peru, with Avianca as a 49% shareholder. The division serves ten major cities from Santiago to Santa Cruz to Sao Paulo, and connects northwards to TACA's hubs in Central America as well as Mexico City and Miami.
No comments: 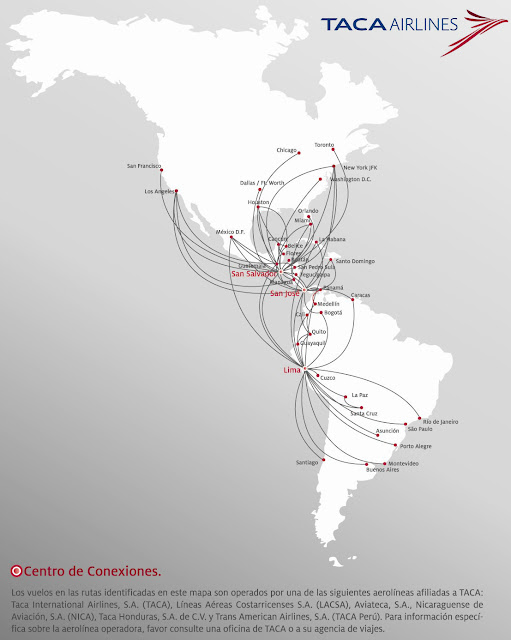 Fast-forward from the previous post, and tiny El Salvador has, through merger and might, grown to one of the largest inter-American airlines and virtually the only international airline between Mexico and Panama, with focus cities in San Jose, Costa Rica and Guatemala City. The Spanish fine print at the bottom of the map mentions the original state carriers, such as LASCA, NICA, Aviateca, and newly-formed national divisions such as TACA Perú, that form the modern airline. The latter is based from a sizable hub at Lima, detailed in the next post.

In North America, the airline runs as far northwest as San Francisco and as far northeast as Toronto, although an earlier route to Boston failed. New Orleans is gone, but Orlando and Dallas have been added, along with highly-prestigious and lucrative routes to Washington and New York. The next few posts looks at the growing airline in detail.
No comments: 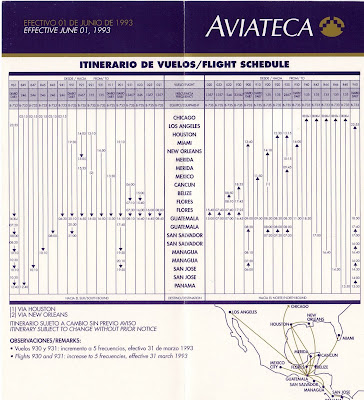 Continuing with our posts on service between the US and Latin America, this twenty-year old artifact of Mesoamerican aviation is presented: a full intra-American flight schedule and route map for Guatemalan state carrier Aviateca in its Late Post-Classic phase, just prior to be absorbed into the fold of Grupo TACA of neighboring El Salvador.

The schedule stretches from Chicago to Panama, as does the small map at the lower right, showing a web of routes out of Guatemala City, including an unusual route to New Orleans, which would later be rerouted to Honduras after it taken over by TACA. Unfortunately, like the airline that committed to it, the route has not survived to the present day, and New Orleans' role as a primary gateway from the Midwest to Middle America is a distant memory. But here, there is also some sort of connecting service between Louisiana and Houston, which also links with Merida, in the middle of the Yucatan. Aside from its base of operations at La Aurora, the airline held a mini-hub at Flores, gateway to Tikal in the northern Peten department, links to Cancún and Belize. In a sense, Aviateca was the airline of the Mundo Maya, even in the mid-1990s. Yet the Quetzalcoatl was not to survive as its own fleet, becoming one of the five macaws of Grupo Taca just a few years after the publication of this pamphlet.
No comments: 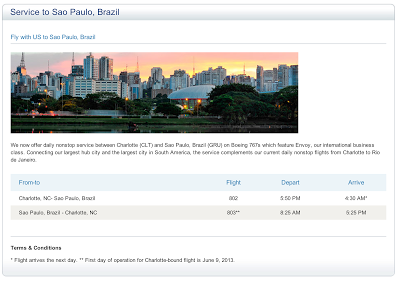 COPA's service from Boston to Panama is not the only new Latin American service launching from the Eastern US this summer. USAirways, which will never be known for bold, globe-trotting expansion, surprised many in 2009 when its strategy to capture the ever-increasing opportunities on international flights was to inaugurate service from its North Carolina hub at Charlotte Douglas to Rio de Janeiro, Brazil.

That service is now accompanied by a parallel sub-equatorial route, with a nightly flight from Charlotte to Sao Paulo, the country's and continent's largest city and most important business hub. The rather drab notice was posted on the airline's website, which notes that an old B767 will be rerouted to run the long inter-American leg. As uninspiring as the dull skyline picture used on the announcement page.
No comments: 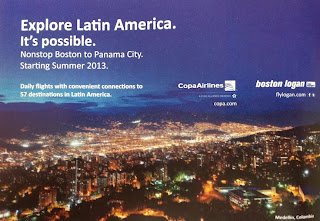 Latin America is possible starting this month from Boston Logan Airport, as Panamanian carrier COPA lands in New England for the first time. In the build-up to the launch, the airline has been blanketing local media with its adverts, such as the glossy, full-color spread in a recent issue of Boston Magazine, showing the glowing panorama of Medellin, Colombia, or the less vivid, but no less eye-catching view towards Sugar Loaf in Rio de Janeiro. Apparently, the airline sees their home hub of Panama as more of a transit point than a destination.

This is the first Latin American airline to service Boston Logan since the unsuccessful attempts in the previous decade by TACA to serve San Salvador, and Aeromexico to offer a non-stop to Mexico City.
No comments: