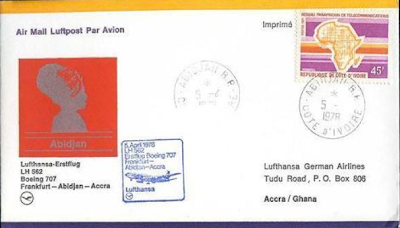 An envelope from mid-1978, the first flight for a Lufthansa routing from Frankfurt to Accra via Abidjan, on a Boeing 707. Its unclear what the imprint in red is supposed to be, other than an African woman with a head-wrap. The envelope is addressed to the Lufthansa office in Accra and stamped in Cote D'Ivoire. Later, the German carrier would reach Accra via Lagos, a practice that continued through 2009. Lufthansa hasn't served Port Bouet Airport in many years, and recently discontinued service on Condor-adorned jets to Accra itself, in favor of its sister carrier, Privatair.
No comments:

An Air Burkina advertisement for Togo, from about a decade ago, which is dominated by the profiles of a man and woman who may be intended to portray customers, or perhaps the old pilot-and-stewardess duo, but whose body language is too stiff to suggest any familiarity.

Behind them rises the tail of an unknown jet with a strange, double-waterfowl emblem which is not associated with Air Burkina. The airline's own very  memorable branding is tabbed at top-left, showing the shadowed Chi-Wara style emblem.

More helpfully to the right is a route map, showing a spread of flights out of Ouagadougou as far as Paris, which is constrained by layout to be positioned southwest of Sardinia in relation to the rest of the map. The sole domestic hop to Bobo-Dioulasso is shown, and it is notable that not one Anglophone city is served. An address for a local ticketing agent fills the void between the two visual groups.
No comments:

This billboard was positioned prominently at the intersection of Liberation Road and the Obasanjo Highway in the Airport area of Accra, Ghana in late 2011. It shows the network of Air Mali, fanning out from its hub at Bamako, yet its most prominent label is Accra itself. Air Mali, part of the Celestair group, which operates sister carriers Air Burkina and Air Uganda, offers scheduled services to more than 15 cities from Niamey to Nouakchott, Brazzaville to Dakar.
No comments: 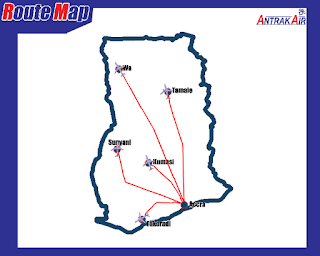 A rather less hi-tech graphic design than the previous posts' late-model, video-game grade inflight map from Kenya Airways is this amateurish route map from Antrak Air, showing its domestic routes from Accra. The flight to Sunyani takes a particularly hard right turn, which could possibly be navigational reality but more likely is dictated by an unfamiliarity with a basic PC Paint program. Antrak's services to Ougadougou did not last, and with the arrival of Starbow and Fly540, Antrak is no longer the chief of Ghanaian skies. But its affordable, scheduled runs to interior cities, especially its more recent links to Sunyani and Wa, serve as a vital link to the boom-town capital, and the carrier can be forgiven a lack of computer drawing skills.
No comments: 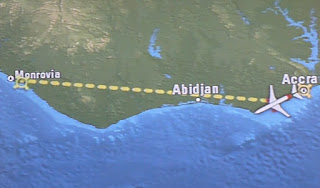 The return leg of yesterday's post, shown on a different screen-shot of Kenya Airways very advanced in-flight video map. A late-model Kenya Airways B737 operates as KQ508 flying from Accra Kotoka to Monrovia's Roberts International Airport in Liberia (having originated in Nairobi). The flight passes directly over, but does not stop in Abidjan.
No comments: 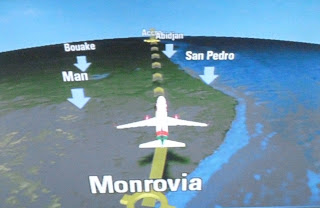 A screen shot from Kenya Airway's fantastically three-dimension inflight map, in this case showing a late-model B737 wing its way down the West African coast as KQ509 from Monrovia's Roberts International to Accra's Kotoka International non-stop, flying over Abidjan and pass several lesser Ivorian cities. A video cartography far better than the standard geovisual programming of many much larger international airlines.
No comments: 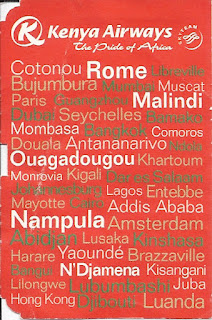 The vast reach of Kenya Airways, the 21st century Queen of Africa's skies, is reflected in this index of cities served from the back of a boarding pass from mid-2011. Major hubs such as Addis Ababa, Lagos and Johannesburg are mixed with smaller capitals such as Ouagadougou, Yaoundé, and Brazzaville, and rarer airports such as Moroni, referred to here as Comoros. Dubai, Mumbai, and other key connections in Asia and Europe are also included (The previous post labels the other destinations listed here).
No comments:

The back Kenya Airways boarding passes in mid-2011 boasted of that airline's expanding reach. An exhaustive array of African arrival points, from Cotonou and Monrovia in the West, to Bangui, N'Djamena and Libreville in Central Africa, to Ndola, Lubumbashi and Lilongwe to the south, as well as Indian ocean island airports such as Antananarivo, Mayotte and Seychelles added with Juba, Bujumbura, and Malindi in its own backyard. These and others are intermixed with an increasingly impressive index of intercontinental entrepôts, including Guangzhou and Muscat. The next posts records the remainder of the more than 40 cities arranged here.
No comments: 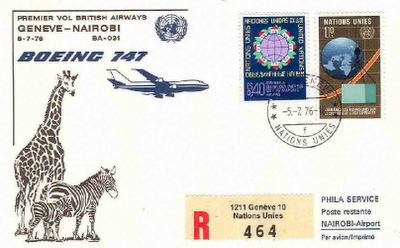 British Airways had long been serving Nairobi before 1976. What is unusual about this envelope, decorated with stock illustrations of East African wildlife, is the service of a BA jumbo jet on the route from Switzerland to East Africa. The B747 can make the journey from Heathrow without any intermediate stop, but this must have been a compelling strategic schedule change for BA, perhaps ferrying UN staff from Geneva to its regional operations in Kenya (note the United Nations postmarks).
No comments:


Perhaps the most remarkable detail of this tinny 1970s-era British Airways advertisement is that the airline offered a wide body L-1011 Tristar between London and Athens.
No comments: 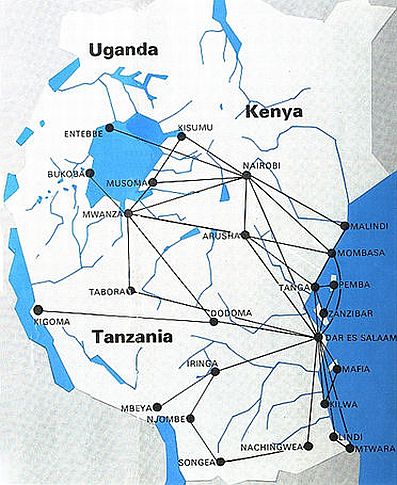 A compliment to yesterday's post from the same source, showing East African's "domestic" network to more than 20 destinations within Kenya, and Tanzania, along with a single connection to Entebbe-- strange that there is not a stronger regional network, even across Lake Victoria to Mwanza, nor even a connection to Dar Es Salaam. The links along the Swahili coast from Malindi to the Mtwara, at the border with Mozambique, are particularly comprehensive.
No comments: 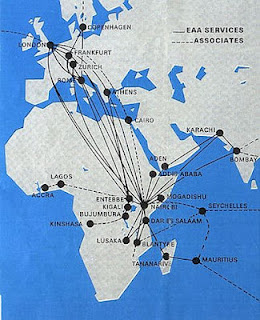 From an obscure but delightful website comes this under-decorated, tricolored rarity: the extent of East African Airways at the height of its operations, with more than twenty cities in three continents from the Nairobi-Dar Es Salaam-Entebbe triangle.

Associates' routes increase the destinations: Accra, Lagos, Kinshasa, Seychelles, and Cairo are shown, with farther routes spanning out to East Asia, or even Australia in the case of the trans-Indian line from Mauritius. The springboard from London surely lands in America and out of Copenhagen comes a longitudinal shot suggesting a trans-polar route.

The year is a total guess, but the graphic design gives an early-to-mid-70s hint, and surely these long European routes were run by VC-10s, which were not even ordered until 1969.

East African sadly ground to a halt in '77, to be replaced by national carriers, of which Kenya Airways is unquestionably the most successful successor. That carrier has a great many more African routes but not nearly the reach into Europe as shown here some 35 years ago.
No comments: 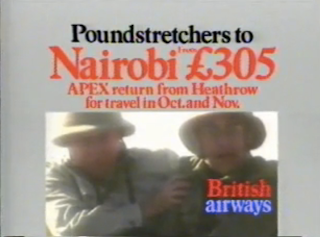 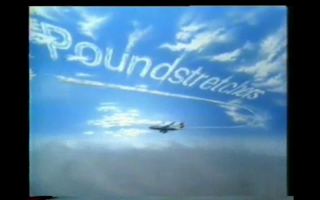 A British Airways B747-200B roars over the Maasai Mara as traditionally-garbed Kenyans and pith-helmeted Euro tourists gawk from the ground. For just £305 return in Thatcherite currency, BA "will take great care of you" as you wing from Heathrow to Jomo Kenyatta international.
No comments: 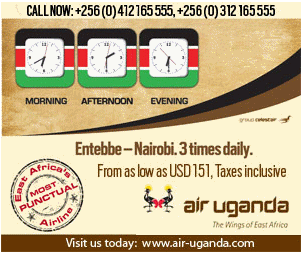 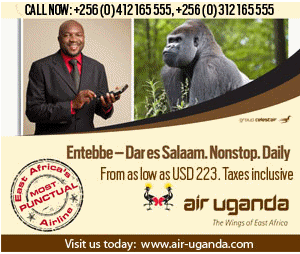 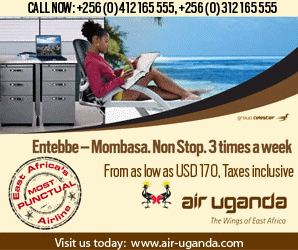 Three current online advertisements from Air Uganda, "East Africa's Most Punctual Airline," showcasing The Wings of East Africa's increased frequencies and low fares on their regional routes from Entebbe to Nairobi, 3-times daily (morning, afternoon, and evening), a daily nonstop to Dar Es Salaam, and a thrice-weekly service to Mombasa, Kenya's seaside resort town. This latter link is a particularly clever advert, showing a businesswoman transitioning between working in an office to lounging on the beach by the Indian Ocean.
No comments: