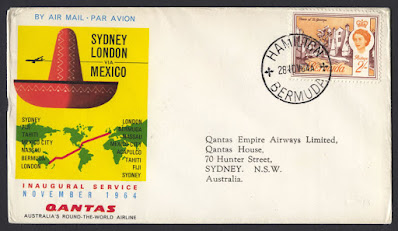 Having concluded November with an Olympic Kangaroo Stretch from Athens to Australia, we continue in December to span the globe with an Antipodean effort: the incredibly unique Qantas round-the-world Sydney to London service via Mexico City, commonly called the"Fiesta Route."

The Timetablist has actually featured a  March 1973 version of this highly unusual routing before, with its stops in "Fiji" and "Tahiti" (which we here track as Nadi and Papeete, respectively), then S-curving through Mesoamerica (the 1970s version first landed on the black sand beaches of Acapulco) before two Anglo-Caribbean hops at Nassau and then Bermuda. At the time, B707s plied the cross-Ocean service; the route was apparently a victim of the 1970s oil crisis, and the arrival of the B747 made the traditional Trans-Asian spine more logical.