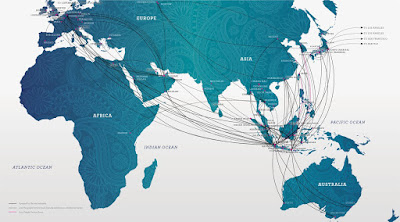 Staying in Southeast Asia as we finish up the month, it recently came to the attention of the Timetablist editorial committee that Garuda Indonesia has never been featured here before. A remarkable oversight which is today corrected with the airline's present route map.

Although the Timetablist strives to exhibit only the finest and more informative examples of airline cartography from the present and the past, all that we have available today is this extraordinarily complicated route map  from the airline's website.

While we applaud an airline which still undertakes to provide an old-fashioned route map on a website in this day and age, and we note that the batik-print of the continental landmasses here is a nice touch, the over-representation of codeshare routes muddles the instructional value of this map.

Perhaps the excess is an attempt to match the flag carrier's former glory. Having once had a wider reach and grander ambitions, Garuda endured an ignominious period as an international aviation pariah, black-listed from European Union airports from 2007 until 2009, and forced to retreat from some of its flagship routes, particularly the prestigious Los Angeles service and the Jakarta—Amsterdam trunk route to its colonial metropole along with every other inch of European airspace.

As with so many flag carriers, the contemporary iteration of Garuda is a simpler, more streamlined version, serving far fewer cities, both it is immediate region and farther afield. The triumph of the airline's renaissance has been its return to Amsterdam Schiphol, and, more recently, the reintroduction of service to London Heathrow in March of this year. Of late, management has publicly affirmed its commitment to reconnect to LAX by next year.

That the Garuda of today only serves two European cities is nearly impossible to decipher from this route map, which shows more cities in Europe, 21, than foreign destinations that Garuda actually operates anywhere.

In truth, Garuda flies to Jeddah and Medina, (as much for the labor migration of its citizens as for holy pilgramages) and otherwise just a bare handful of east Asian megacities: Beijing, Shanghai, Guangzhou, Seoul, Tokyo, Singapore, Kuala Lumpur, Bangkok, and Hong Kong. Flights out of both Jakarta and Denpasar airport on Bali to the major Australian cities of Melbourne, Perth, and Sydney cater to both tourism and business.

That's it. That is the extent of Garuda Indonesia at present. The dozens of other cities on this map are superfluous, showing codeshares and even freighter routes. In this day and age, most travelers are at least vaguely aware that an international airline cooperates with other carriers to ferry passengers beyond it own network; it is therefore completely unhelpful to show Cairo, Nairobi, Barcelona and Bahrain here. An airline's route map would best be limited to the airline's own routes, to demonstrate the actual extent of an airline's operation.

As it is, strangely random information, such as showing both “Moscow” as well as “Sheremetyevo” obscure more interesting operations such as Garuda's Jakarta—Singapore—Amsterdam—Jakarta routing and its non-stop from Medan to Jeddah. As it is, the map gives a sense that Garuda is attempting to display the wide breadth of its former glory of decades past, to the detriment of a more informative graphic.
No comments:

Continuing from the last post, here is another Royal Brunei route map, from some time before the flag carrier's logo changed, de-emphasizing the open-palmed crest of the Sultanate in favor of the current, boring monogram. It's often fun when pictograms stand in for cities; those here by and large stay within the pedestrian and predictable—a beefeater for London, the Merlion of Singapore, the Petronas Towers for Kuala Lumpur, a camel ride for Dubai, the Oriental Pearl TV tower for Shanghai, the skyline of Central for Hong Kong, oranutangs for Kota Kinabalu—although probably less know is the symbol Surabaya, the statue depicting the legend of the shark fighting the crocodile. Also, its unclear how Melbourne is particularly associated with a hot air balloon.
No comments: 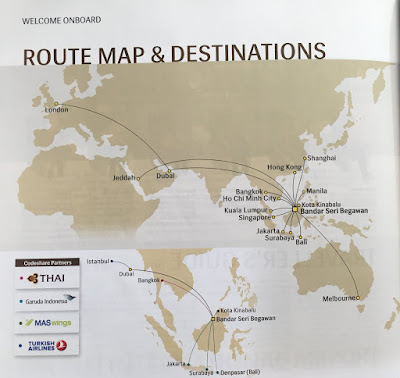 The Timetablist has featured Royal Brunei before—compare the above map, currently printed in this month's inflight magazine, with the 2011 version posted previously. This small airline of one of only two sovereign sultanates in all the world. The carrier has traditionally connected the tiny southeast Asian statelet, the only country whose territorial extent exists entirely on the island of Borneo, with the rest of east Asia, and has also long operated a route to London Heathrow via Dubai, which is today operated with the sleek B787. The non-stop flight to Jeddah is a somewhat more recent development. As recently as that last post, multiple cities in Australia were served, now the sole route is Melbourne. The inset shows some codeshare partnerships with Garuda, Thai, MAS and Turkish, although other than Istanbul, RB already flies to each destination shown.
No comments: 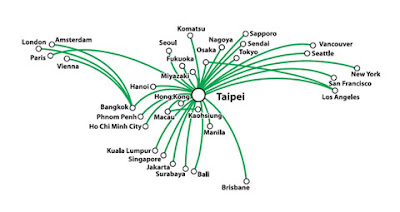 Continuing to look at the airlines of Taiwan, here is straightforward route map of the Republic of China's secondary carrier, EVA Air, in its signature evergreen. From Taoyuan, long haul operations spread east and west, to Europe and North America; EVA was one of the earliest Asian carriers to land at Seattle and has long served Vancouver as well. (Houston has since been added).
Amsterdam and Vienna are interesting European destinations, and are still served in an unusual routing via a minihub Bangkok—only Paris is served direct from the home airport. Other notable destinations include the sole antipodean city of Brisbane, and a number of secondary cities in Japan such as Fukuoka, as well as the Osaka—Los Angeles supplementing its direct service from Taipei.

Notably absent from the map is any Mainland China service; EVA Air now flies to 17 cities in the PRC.
1 comment: 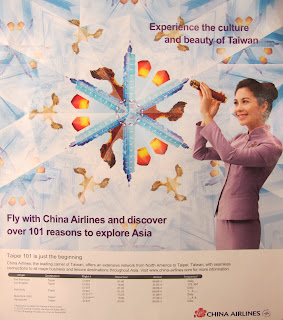 Continuing to look at China Airlines, this print advertisement from last year details the carrier's trans-Pacific schedule to North America. Below the lovely kaleidoscopic imagery, a table details the schedule and frequency of flights from five gateways to Taipei Taiyoun: Honolulu, Los Angeles, New York, San Francisco, and Vancouver. Up until 2008, China Airlines flew to Seattle as well.
No comments: 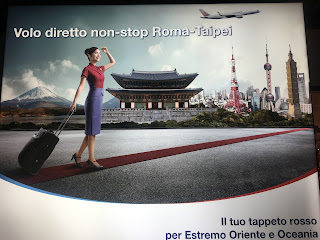 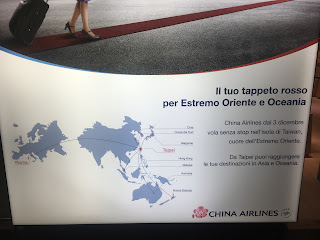 A back-lit billboard currently gracing the departures halls of Rome Fiumicino Airport, promoting China Airlines's hub at Taipei as a gateway to the "Extreme Orient" and Oceania. Although the dotted lines land on countries, not specific cities, there are a lot of options of the Italian traveler headed east, as CAL links to three cities in Australia, two in New Zealand, two in Malaysia, and a dozen in Japan. Indonesia and the Philippines are also served but are not shown on this advertisement's map.
No comments: 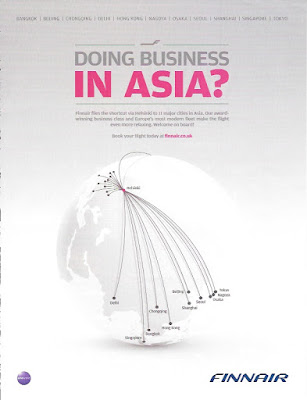 As our first post of the month featured an unusual route between easternmost Europe and China, this item which has been in our filebox for a few years seems most relevant. Finnair has over the last decade remade itself as a premier airline between Europe and Asia, especially China, avoiding competing on the trans-Atlantic competition, where its northeasternmost position was a disadvantage, and playing up the strength of Helsinki's near-polar location the long-haul routes follow flow across the continent efficiently.

Finnair has had a lot of success with this strategy, even profiting from some of the world's more random long-haul routings from what is essentially a very small airport at Vantaa to cities such as Nagoya and Chongqing, which was the newest destination on this map. Since this magazine advert, Finnair has expanded into China further, reintroducing Guangzhou and adding Xi'an, as well as serve to Ho Chi Minh City, although Hanoi was less successful. Much of this service is also apparently seasonal.

This advert's smooth whites and greys almost feel polar, positioning the globe in such a way that the 11 trans-Asian routes flow over its curvature. Its unclear exactly what the European routes are, as they are not labeled, but the concept of Helsinki as a transit hub is made quite clear. A single line tucks behind the planet, indicate Finnair's few North American routes, which currently consist of New York and Miami and seasonal service to Chicago, but will soon include San Francisco. Boston, Ft. Lauderdale, Seattle, Toronto and Montreal are among those cities that didn't work out. 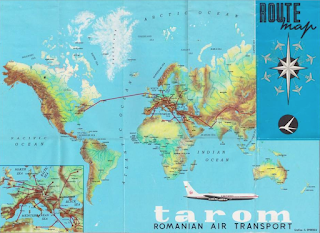 Continuing to look at the global extent of the airlines of the Eastern Bloc at their height, this unique map shows the routes of TAROM, the Romanian state carrier spreading across four continents.
There are plenty of routes within Europe, on both sides of the Iron Curtain, culminating in an interesting Bucharest—Prague—Amsterdam—New York schedule as its sole operation across the Atlantic. This route may or may not have stopped in Gander—it is difficult to be certain as the cartography inconsistently marks destinations, with the red lines variously pass over or turn at a city without a marker, or break at a city on the map, or such breaks are marked by a circle around the underlying city.

Several lines cross the Mediterranean to Algiers and Tripoli (possibly by way of Benghazi) in a similar vein to Czechoslovak Airlines. 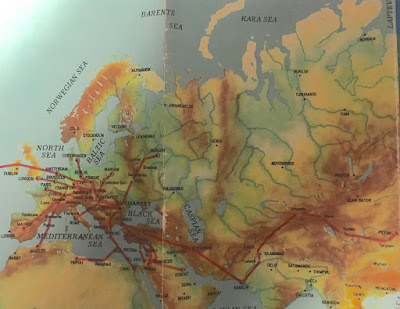 What is unquestionably the most notable aspect of the airline's operation occurs on the southeastern corner of the map: the long, winding tentacle reaching its way from Bucharest to Istanbul, then onward to Tehran and then reaching Karachi, where it elbow-bends along the Indus and over the Himalayas to reach Urumchi in Chinese Turkestan, where it continues across the vast People's Republic, where it seems to waystation at Hami, Yumen, and Taiyoun to finally terminate at Beijing.

With just a little over 100,000 people live in tiny Yumen City, in Gansu province, which doesn't even boast an airport. While Hami, a small outpost in Xinjiang, has a regional airport, and Taiyoun's Wusu International is the principal airport of Shanxi Province, there are few international flights, and no European service, from these three cities. This trans-Socialist aviation envoy is surely a rarity in aviation history.