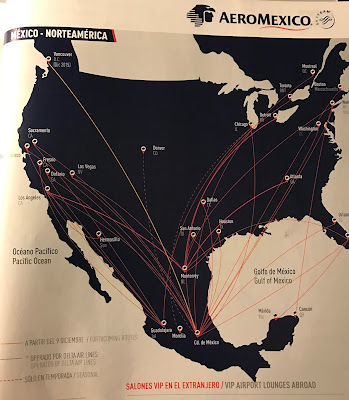 Continuing from the previous post, a second map from Aeromexico's in-flight magazine at the end of 2015, showing the airline's array of flights from seven cities to its NAFTA partners.
Although Aeromexico serves 18 cities in los Estados Unidos, this is perhaps fewer than might be guessed; it is fewer U.S. airports than British Airways to London, for instance. Most flights originate in Mexico City, with a handful fanning out from the northern economic powerhouse of Monterrey—which will be the subject of the subsequent post. There are a few flights out of the country's second largest city: Guadalajara, but surprising only one flight from Cancún, Mexico's second busiest airport, to New York; today the route is flown only by Delta and American Airlines. While Avianca and COPA fly to several Florida cities such as Ft. Lauderdale and Tampa, Aeromexico only served Orlando and Miami, and the Merida flight has been discontinued. The flight to Denver is now year-round. The flight from Morelia, in Michoacán, to Chicago-O'Hare is still flying seasonally. The Boston flight, which commenced in June of that year, has sadly since been discontinued.
There is a more significant cluster of flights up to (Alto) California, including to less commonly-served airports such as Sacramento, Ontario, and Fresno—which are all premiering on The Timetablist with this post. The Guadalajara—Fresno link is especially notable as the San Joaquin Valley metro has no direct flights to domestic cities such as New York, Washington, or Houston.  Los Angeles has links to four cities.
The three largest airports of Canada are connected to Benito Juarez; the flight to Vancouver has been an apparent success.