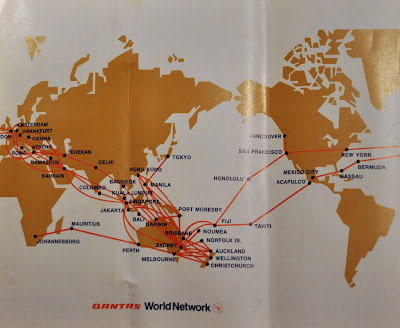 Yet another goldmine from the lustrous vein of Flickr user caribb's collection, the next three posts will examine the fold-out global route map of Qantas from its timetable issued 4 March 1973.

Qantas was quite a different operation in these days of the early jet age: aside from a dense weave of antipodean services between Australia and New Zealand, and a web of southeast Asian services, the Australian carrier branched around the globe, with a number of rather curious waystations which aren't on its network today in the Middle East and Europe. These will be examined in more detail in the following two posts.

But surely what is most unusual in the entire system is its secondary round-the-world link: the Australian airline's famous "Fiesta Route." A completely unique routing which began in 1966 with the first of the airline's 747s, spanned the South Pacific at Fiji and Tahiti, then crossed the  rest of the ocean and the equator to reach Acapulco, Mexico, hopping on to Mexico City, the wingéd Kangaroo continued eastward to the British colonies at Nassau and then Bermuda, and transversing the Atlantic to finish at London.

The next two posts will examine this item in more detail.

Timetablist will be dedicating an intermediate period going forward to highlight some of the incredible finds of caribb's collection. Timetablist would like to thank caribb (Doug from Montreal) for generously allowing the reuse of these images under creative commons license terms.