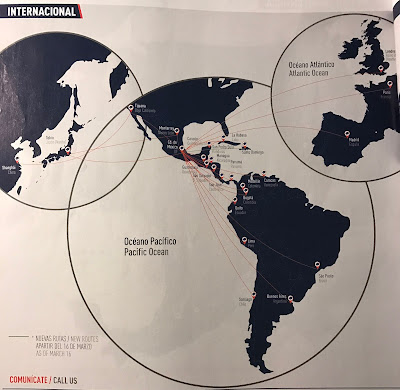 Somehow in the storied history of The Timetableist, now approaching its 11th anniversary, the great air carrier of the Federal Republic of Mexico has never been previously featured. Continuing from the previous post, it's opportune to take the fiesta stop-over in México D.F. and look at the country's remaining flag carrier as it looked in its expansionist phase of half a decade ago.

Aeromexico runs a three-continent strategy, covering the main gateways of the Americas, switching through its central Benito Juarez hub, while stretching its reach across the oceans with what is now an all-Dreamliner fleet. Of particular interest is the triplet of Trans-Pacific efforts: Mexico City—Tokyo (Narita), Monterrey—Narita, and Mexico City—Tijuana—Shanghai—Mexico City, which neatly landed Benito Juarez at exactly the same time as it took off from Pudong International.

According to the always reliable Wikipedia, the Monterrey—Japan service was a temporary technical stop on the way from Mexico City in lieu of Tijuana. Service today is non-stop from Mexico City only.

In early 2017, the carrier announced a second attempt to link the northern economic powerhouse of Nuevo León with Asia: a four times weekly Mexico City—Monterrey—Incheon schedule which, like the Tokyo service, would return eastbound non-stop. Apparently this proved unnecessary, as Aeromexico still served ICN as of early 2020 but only non-stop from Mexico City. 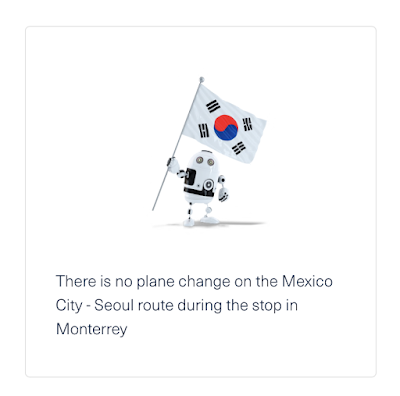 While this peninsular service seems to have met with success—presumably due to links with SkyTeam megacarrier Korean Air—the non-stop to Shanghai and SkyTeam partner China Eastern proved less durable, as the thrice-weekly long haul was cut in mid-2019.