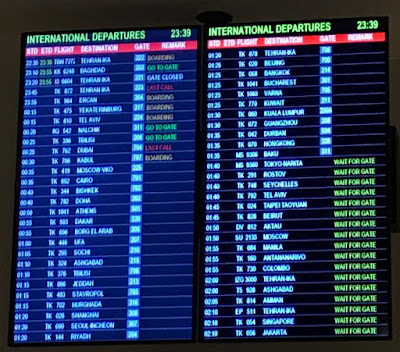 Continuing from the previous post, some nine months and 12 hours later, the same departure monitor screens inside the Turkish Airlines lounge at Istanbul Atatürk Airport, showing the bank of midnight flights across the globe, with nearly as much activity as in midday. As at all hours, home town flag carrier Turkish dominates the schedule, again challenging even the geographically astute by linking to such unusual and far-flung destinations as Antananarivo, Kabul, Ufa and Seychelles. Turkey's other airlines make an appearance, with Onurair flying to Nalchek in the Russian Caucuses at twenty past 12AM, and the now-defunct AtlasGlobal with a delayed take-off to Baghdad.

There are several regional rarities that make an appearance, including Turkmenistan Airlines to Ashgabat (here spelt Ashgabad) as was featured on the Timetablist last month. The rather sketchy SCAT Airlines takes off for the uranium town of Aktau on the Caspian Coast of Westernmost Kazakhstan at ten til 2AM.

The destination most frequently listed in this time block is Tehran's Imam Khomeini Airport, listed 5 separate times, not only via Turkish at 11:45 but also Iranian carriers Aseman Airlines ("EP"), ATA Airlines (noted with the code "TBZ" as the very first entry) and Zagros Airlines at 2AM (also referred to with its longer ICAO code "IZG"). Since this time, according to the usually-reliable tables at Wikipedia, both ATA and Zagros no longer fly this route, nor indeed maintain a base at IKA altogether, shifting to solely domestic operations at Tehran's older secondary airport, Mehrabad International.

One last mystery on the board are the two Egyptair flights MS9306 to Baku at 1:35 and MS9360 at 1:40 to Tokyo-Narita. They're frequent enough to be logged but what are these? Charter flights?