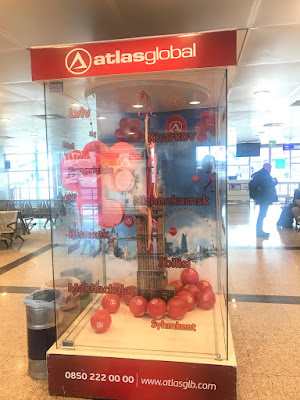 A somewhat strange, translucent adverting stand placed in the lower level of the (now closed) Istanbul Ataturk Airport—one of those disappointing, low-ceilinged basements waiting rooms where travelers await the chaotic stampede of board-by-bus to the remote stand.

As unappealing as the room is, it is not very much improved by plexiglass box obstructing the flow of passengers to the gate. But at least it is adorned with interesting stickers: Bishkek, Lviv, Kharkov, Makhachala, Nizhnekamsk, Tbilisi, Zaporizhia—even an astute geography buff could be stumped. Turkish low-cost, leisure airline AtlasGlobal specialized in regional flights across the Black Sea and Caspian region.

This, it seems, would be the high-point of AtlasGlobal, which always sounded a bit more like an industrial conglomerate than an air carrier. The airline faltered in the year following this photo, temporarily halting all flights, only to attempt a limited relaunch in early 2020 which only lasted until February of this year.