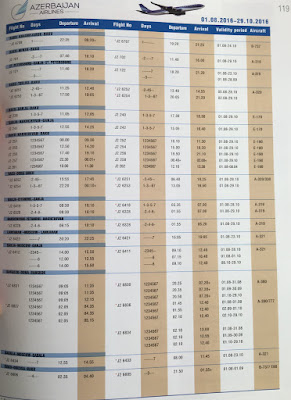 Continuing from the previous post, the second page of Azerbaijan Airlines's inflight magazine shows the airline's pair of domestic routes, from Baku to Ganja, (Gəncə in Azeri) the country's second largest city, in the northwest, and Nakhchivan in Autonomous exclave, separated from Azerbaijan proper by part of Armenia. The two secondary airports are connected to each other  as well, and there is a twice-weekly service to St. Petersburg. The only other service not asterisked as a non-codeshare flight is the twice-weekly Baku-Minsk service. Today, the airline still connects to both domestic cities to Baku's Heydar Aliyev International Airport.