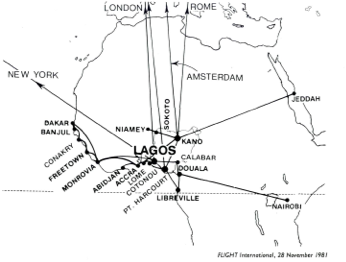 In looking from Arik Air's route map from October back to Virgin Nigeria's system from 2009, we can stretch back almost thirty-two years to this representation of the Nigeria Airways network of November 1981, as seen in the old trade publication, Flight International.

There are many similarities, particularly the nearly-identical route line hugging the West African coast to Dakar with a mini-hub at Monrovia. Intercontinentally, there are familiar routes to London and New York.

What is more remarkable, however are the many differences: Long-haul flights to Amsterdam, Rome, and Jeddah, all remarkably emanating out of Kano, with an apparent non-stop to London from Port Harcourt. There is also a trans-African route from Lagos to Calabar to Douala, crossing the heart of the continent to Nairobi, and a link to Libreville from Calabar and Port Harcourt as well. Lastly, a northern flight to Niamey originates in Kano and stops in the sultanate of Sokoto before crossing the border.

Many of these routes no longer exist. Part of this is the decline of Kano as an intercontinental airport, a topic recurring in Timetablist back to its most ancient archives, but is most startling in this earlier Nigeria Airways route map of 1973, when the majority of Nigeria Airway's European routes departed from Kano.  Like many deregulated systems, Nigeria's air services have consolidated, dropping secondary destinations and service from non-hub cities.