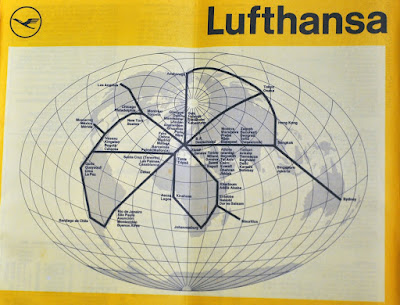 A recent post referenced the famous Lufthansa Spinnernetz Streckenatlas, which brought to our editorial attention that we had overlooked posting one of the more legendary graphics of Timetable History. Here is the 1973 version, courtesy of the perennially superb collection of Flickr user Caribb.

As its base, the map is a unique, polar-focused pseudo-Azimuthal projection, showing all continents but with the Pacific meridians hooking back away from the globe's infinite edge into the north pole. The network itself is given an even more liberal representation, made up of just ten enormous trunk routes, intersecting at the center of the map over Germany (but, interestingly, not specifically mentioning any Deutsche Stadt).

Foreign and overseas destinations are listed in neat columns as these thick ribbons pass near to them: Singapore and Jakarta are skirted, not passed over, on the way to Sydney (Lufthansa left Australia decades ago). A single line from Philadelphia to Quito hits Nassau, Kingston and Bogota, meeting up with some sort of Europe–Caracas route before reaching the Andean way stations. A small offshoot links to Mexican destinations, including Monterrey and Merida, which are also of course no longer served.  The transpolar route from Germany to Anchorage makes right angle with Germany—Bangkok; a semi-circle of Hong Kong—Osaka(Itami)—Tokyo(Haneda)—Anchorage makes the grapefruit quarter.

Other images from caribb's Flickr stream show a fleet of DC-8s and 707s in heavy rotation, assisted by the brand-new B747s in the fleet. The next post will detail the African and South American Cone destinations.

As it has so many times in the past, Timetablist would like to express its appreciation for Flickr user caribb (Doug from Montreal)'s incredible collection, and to say thanks  for allowing the reuse of these images under creative commons.