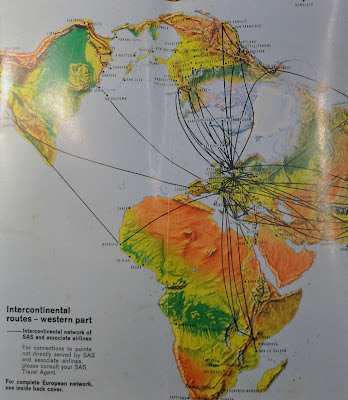 The impressive five-continent Scandinavian Airlines System in 1973, a gem of incredible collection of flickr user caribb. Here is the left-hand portion, showing the Western Hemisphere and the African continent.
SAS used Central and Southern European airports as more temperate way-stations for many of its transocean crossings: Zürich and Athens appear to be particularly large bases for the African routes, and the South American connection clearly stops at Lisbon, from whence it continues to Rio de Janeiro, Sao Paulo, Buenos Aires, and Santiago. A second southern Atlantic routing runs through Robertsfield in Monrovia on the way to Rio de Janeiro.
East African routes reach Entebbe and Nairobi from Europe before proceeding further southward, spurring off at Dar Es Salaam and terminating at Johannesburg. Today Scandinavian does not even land at Cairo.
The North American network is much less different today: there are still transpolar non stops from Stockholm and Copenhagen to Newark and Chicago, but not New York-JFK. Seattle was a long-lasting station which closed only a few years ago, and Los Angeles, Toronto, and Montreal have all been dropped. The Scandinavian Airlines of the 21st century has also completely retreated from Africa, the Caribbean and South America.
Special thanks again to Flickr user caribb (Doug from Montreal) for both assembling an outstanding collection of vintage airline literature, and making it available to others via Creative Commons terms.