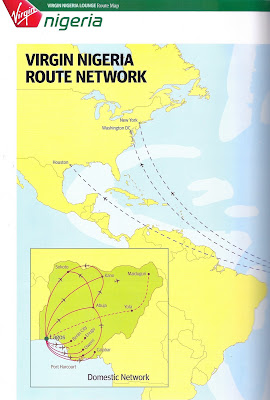 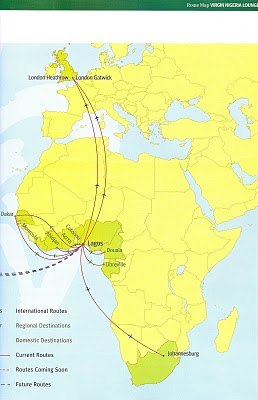 Virgin Nigeria is slowly being rebranded as Nigeria Eagle Airlines, as Sir Richard has apparently had enough of doing business in Nigeria. Can't blame him for giving it a go and sticking with it, though. Its not that bad, either: new planes, relatively low fares (by African standards, anyway). It didn't ever sustain its ambitious plans, however, as this route map, from one of its last published in-flight magazines, shows. The London and Johannesburg flights were a bit erratic, its reported. Timetablist can also confirm that Virgin Atlantic itself was sometimes seen landing in Nigeria: Abuja, Lagos and Port Harcourt, if mental archives are reliable...
The other page from the route map is totally irrelevant as truth but a ponderous exercise in wishful thinking. VK never made it across the Atlantic, despite the abundant traffic between New York, Houston, Washington and Nigeria. Another Nigerian line, Arik Air, has quietly inaugurated a JFK service, which seems to be doing well despite the recent added security to Nigerian air travelers.