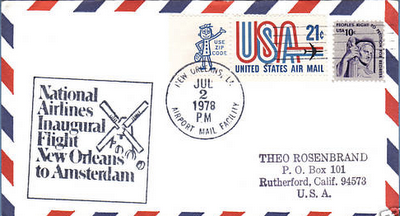 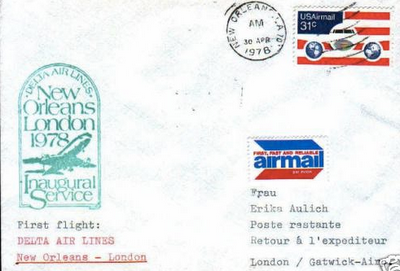 New Orleans apparently had a big year in 1978, when the deregulation bonanza seems to have brought the Crescent City two European routes: Delta to London (Gatwick) and National's DC-10 Sunjet non-stop to Amsterdam (connecting the world's two lowest-lying airports. What fun). Its only conjecture to say that it would have been half European tourists and have Shell oil personnel on board. Timetablist is unable to confirm whether the Delta flight was non-stop;might easily have been through Atlanta. By the following year, National had a sizable trans-atlantic presence, and appeared to serve Paris from New Orleans as well.
New Orleans was a significant node in Pan Am's connection from the Central US to the Caribbean and Central America, but that's all gone now. For a time pre-Katrina, the all that was left was a weekly TACA connection to Honduras, the occasional charter to Cancun. Also, British Airways did for a time serve The Big Easy on its way to Mexico City. The author of the Louis Armstrong Airport Wikipedia article summarizes this history quite nicely.