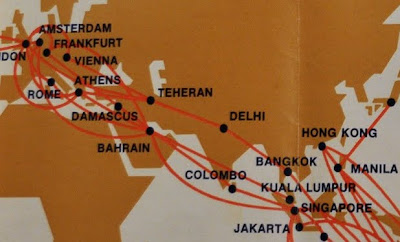 A detail of the trans-Asian legs of the Qantas network as of March 1974, from the incredible collection of Flickr user caribb.
Surely Damascus and Tehran have not for decades been regular waystations on the way to Oz, politically difficult as they have been for some time. Likewise the curious presence of Colombo or even Bahrain--as has been previously discussed on these pages, the dominance of Bahrain and Kuwait as a Gulf stopover in previous decades has largely ceded to the booming trio of Dubai, Abu Dhabi and Doha. In fact, Qantas by-passes the Middle East entirely today, having completely lost out on any traffic to the region from overdominant Emirates.
Equally, Qantas is today only present at London and Frankfurt--is many other European destinations, several of which are here, have been dropped since the 1970s. Really, its only remarkable that travelers accumulated in Athens, Rome or Vienna in significant weekly numbers to support such an Australia-bound service.
Note from the previous post that two lines sprawl out from London, one bound for New York, the other for Bermuda, Nassau, Mexico, and Polynesia.
Timetablist will be dedicating an intermediate period going forward to highlight some of the incredible finds of Flickr user caribb's collection. Timetablist would like to thank caribb (Doug from Montreal) for generously allowing the reuse of these images under creative commons license terms.