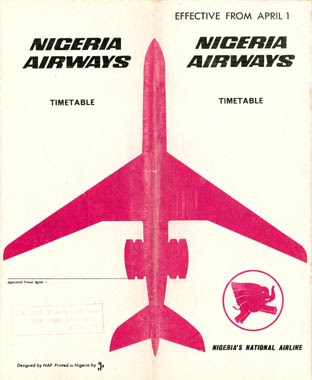 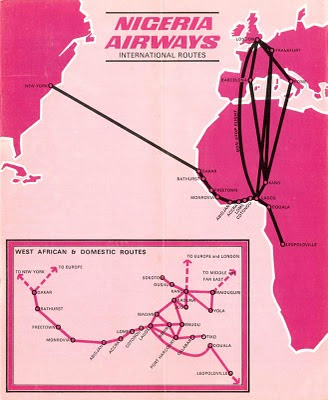 Pink was chosen to capture the essence of the fleet of the wingéd elephant's global reach in this delicious timetable from April 1966, sporting a roseate VC-10 flagship on its cover, with the stout pachydermian pegasus at lower left.
Regionally, Nigeria Airways plied a leg southeast to Douala and Leopoldville, and a littoral run west from Lagos, skipping only Conakry to reach Dakar, from whence it lept across the Atlantic to New York.
A northern web branches out from the Sahelian capital of Kano flew to Rome--curious how prominent this city was on the Europe-Africa networks--distance was perhaps a factor. Within Europe, unexpectedly the lines land at Rome, Frankfurt and Barcelona. Somewhat odd choices--perhaps distance was still a consideration. And London, naturally, London. A separate premier line from Lagos to London non-stop, which the map underscores. Abuja, of course, has yet to exist. The inset detail of the domestic network is examined in the next post.
The example featured in this post is another gem of the outstanding collection of Björn Larsson, part of the encyclopedic archive at Timetable Images. Thank you to Larsson and the rest of the Timetable Images team for their work and reproduction courtesies.