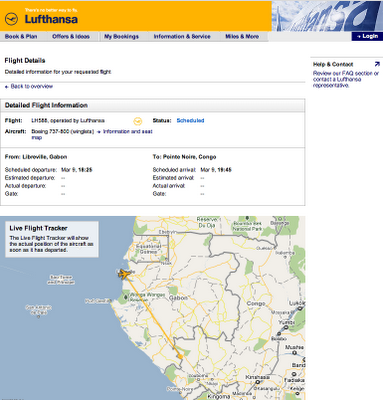 Here is the curious case of LH588: a 7 hour, 15 minute flight on board a wingleted B737-800 of Lufthansa-owned PrivatAir, from Frankfurt Airport to Libreville, Gabon, and then an onward hop of a little over an hour from Libreville to Augostinho Neto International Airport in Pointe-Noire, Congo Republic (which is also served by Air France non-stop from Paris). A seven hour journey aboard a single-isle plane may sound unbearable; but PrivatAir is all business class.
How does a major airline sustain an all-business class narrowbody, trans-equatorial service to two remote, sparsely-populated countries? Petroleum, of course.