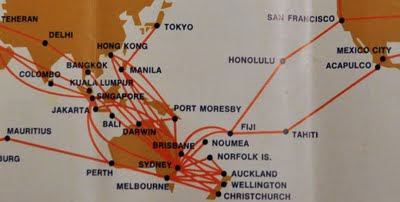 This detail from the previous post, part of Flickr user caribb's collection, showing the global reach of Qantas in spring of 1974. In this detail, the dense jumble of routes to east Asia can be seen.
Most of these destinations remain the same today, but are served more directly-- its certainly curious to consider reaching Tokyo from Sydney via Manila or Hong Kong via Port Moresby, a city which Qantas, somewhat surprisingly, does not serve today. Kuala Lumpur, Bali and Colombo are also not part of the Qantas system; Delhi has been switched out in favor of Mumbai.
A greater number of other changes are due to the paradigm-shift in air carriers in Southeast Asia and the South Pacific, with Qantas itself transferring many holiday destinations to its own Jetstar and coming up against southeast-Asian competitors such as Air Asia X. new entrants such as the confusion amalgam of the Virgin Group now dominant participants in nearly every short- medium- and long-haul market, from domestic flights to service to Los Angeles.
The next and final post will examine the European corner of the network.
Timetablist will be dedicating an intermediate period going forward to highlight some of the incredible finds of Flickr user caribb's collection. Timetablist would like to thank caribb (Doug from Montreal) for generously allowing the reuse of these images under creative commons license terms.