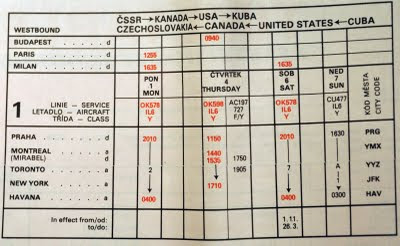 Still diving through the incredible collection of Flickr user caribb. Here is a late Iron-curtain era handbook of ČSA Ceskoslovenske Aeroline, Czechoslovakia's state carrier, as its quad-engined IL-62 superjets roared across the Atlantic on Thursdays for the more democratic destinations of Montreal's Mirabel airport in Canada, which turned south to New York's JFK. Twice a week, OK578 spewed exhaust southward to arrive the next day at the socialist-tropical paradise of Cuba. If those two operations weren't convenient enough, on Sunday a Cubana IL-62 made the Prague-Havana run.

Note that Y class only was provided. A connecting service to Toronto and New York via Air Canada is helpfully included.

The top table appears to offer a feeder service from Budapest, Milan and Paris into these intercontinental services.

Timetablist would like to thank caribb (Doug from Montreal) for generously allowing the reuse of these images under creative commons license terms.