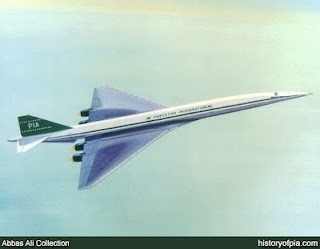 There was a particular moment, early in the supersonic era, when the world community looked forward to the widespread employment of the Anglo-French Concorde, as well as its American and Russian counterparts. The Boeing SST never made it beyond the prototype phase; and the Tupolev's Tu-144 greatest achievement was whisking mail from Moscow to Alma-Ata.

Europe's Concorde of course, only entered limited service on routes that were mostly over water, and for most of its life could only survive on the highest-paying routes from New York-JFK.

This vision shows Pakistan International's own sound-barrier-breaking flagship on an imaginary route clearing a cottony cover of cloud, perhaps reaching altitude out of Heathrow on its way to Karachi. Courtesy of the wonderful website HistoryofPIA.com. PIA was one of over a dozen global airlines that placed orders for the Boeing SST before the program was cancelled.