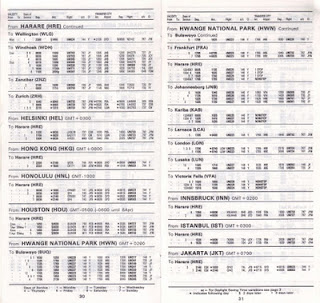 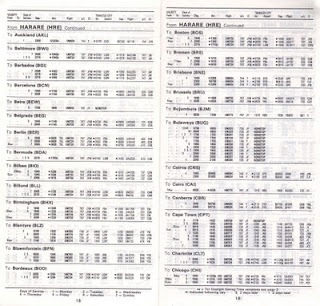 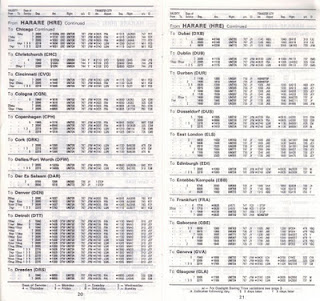 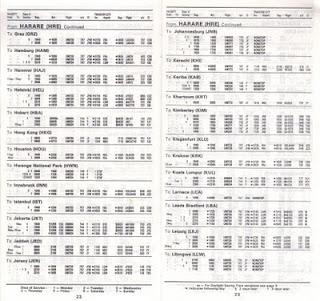 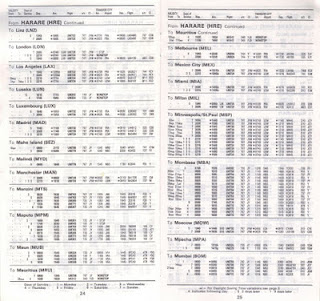 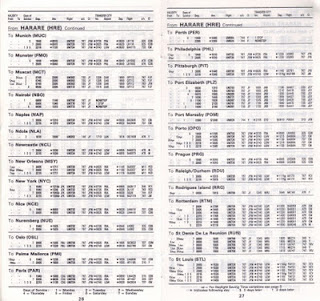 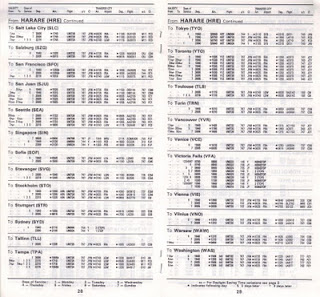 The full schedule of Air Zimbabwe services from Harare in 1997 shows 17 destinations on at least two, possibly three continents. The typical timetable handbook format, used around the world by many airlines, often presents some curious itineraries: as in this instance it is difficult to contemplate such a volume of passengers between Zimbabwe and, say, Salt Lake City, or Tampa, or Klagerfurt, or Barbados, to warrant taking up the space (and expending the printing costs).

This is particularly true as the state carrier at the time seemed to serve only Frankfurt and London Gatwick (interestingly via Larnaca) beyond Africa, aside a somewhat curious Harare-Perth-Sydney service, with a UM flight number but operated by a B747. As there is no other source which records this venture, it suggests that Air Zim was wishfully assigning a codeshare as its own metal.

A decade later, the airline's schedule would pivot away from Antipodean and Anglophone areas and orient itself along the Africa-Asia-China axis  (as seen yesterday) which has been a major story of the 21st century.

This item is borrowed from the incredible blog airline-memorabilia.blogspot.com which uncovered this 15-year old gem. The Timetablist is indebted to the Airline Memorabilia Blog for its continued support and the privilege of reposting these timetable pages.