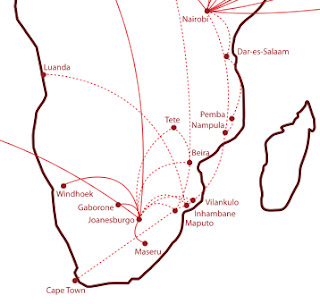 The well-tended website of Mozambique's state carrier, Linhas Aereas de Moçambique, features a handsomely spare route map. Although the online image shows the entire globe, LAM's routes are almost entirely confined to southern Africa as shown here. It is therefore curious that Asia and the Americas are included, as LAM serves neither and in fact only recently was able to re-enter the ex-African market with its return to Lisbon this year. There is a strong emphasis on not only other continents but connecting carriers' services, which quite strangely are shown in solid lines on the map, while the airline's own network is only depicted in faint dotted lines: the effect is to blur distinctions and make LAM's own operations diminished.

While the scope of LAM's presence is small, it impressively flies internationally from what appears to be no less than eight of its ten domestic airports: flies to Nairobi and Dar Es Salaam come out of northeastern Nampula and Pemba, whereas Joanesburgo is served from five cities. There is also a nonstop from Maputo to Cape Town. Somewhat strangely, it appears that the flight to Luanda originates from Inhambane, and the flight to Lisbon on LAM's own wings appears to stop in Beira-- perhaps these are cartographic errors?