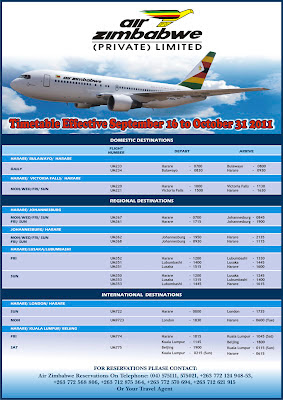 An Air Zimbabwe timetable from last year, some 14 years after yesterday's map, shows an airline no longer limited to Southern Africa, but with less service within the region also.

Such important connections as Cape Town, Durban, and Nairobi are gone, although the service to Lusaka now connects to Lubumbashi in the DR Congo. The furtive crossing of the Indian Ocean to Mauritius has now been replaced with a quixotic Asian connection to Beijing via Kuala Lumpur. The prestigious London route has been restored.

While the aircraft livery has been updated and a global reach has been achieved, Air Zimbabwe continues to be plagued with problems, and indeed was grounded in the time between this schedule's printing and now.