Tunisair: The Routes from Germany, Summer 2015 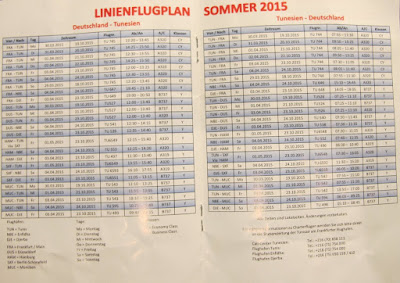 Last month turned into quite a curation of Germanic aviation, and the Timetablist archives still yield a few more items along the same theme to start this month.

Tunisair published this table in the summer of 2015 specifically for its German-speaking and German-located customers. The chart details the Tunisian flag carrier's array of services from multiple German gateways to multiple destinations in Tunisia. The flights were operated with narrow-bodied B737s and A320s (which is all Tunisair had up until recently). Most flights to Tunisia were to the capital, Tunis, and most were originating from Frankfurt, with a daily flight in each direction. There were also frequent series from Düsseldorf, Hamburg, Munich and Berlin Schönefeld to Tunis, Enfidha and Djerba–the latter two airports, gateways to the famed Mediterranean beaches of Tunisia, mostly connected on weekend leisure schedules. This post is the first time that Enfidha has been featured on the Timetablist.