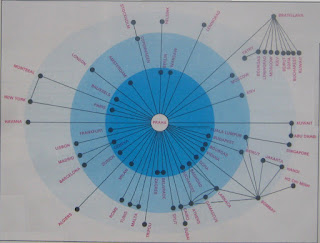 In the hundreds of Timetablist posts in almost seven years, there have been few works of such cartographic styling as original and dynamic as this Czechoslovak Airlines route map from some time in the mid-1970s. It's pinwheel arrangement and radial design partly recall the famous Lufthansa Streckenatlas from the 1970s, and its disregard for distance recalls a contemporary Thai Airways route map. As this magnificent bullseye covers the entire globe, it will be discussed through a series of posts.

Radiating out from Prague with dissipating intensity, a pattern of straight-line routes connect four continents. Cities are arranged roughly by cardinal direction, but great liberties are taken with specific location. The innermost, darkest ring covers central Europe, while a robins-egg disc demarcates the edges of Eurasia, from London to Larnaca. The faintest, outer orb, bulging at the middle in an almost hyper-elliptical projection, is even less rigidly adherent to true geography, with Dubai, Jakarta and Montreal equidistant.

What is perhaps most fascinating in terms of aviation history is the extraordinary extent of CSA's global reach, from Havana to Hanoi and Ho Chi Minh City.

There was a major waystation in Bombay,connecting directly from Prague and via Athens, Damascus, Larnaca and Beirut, with onward services to Jakarta, Hanoi, Ho Chi Minh City, and Singapore. Kuwait and Abu Dhabi have a dedicated service from Prague, shown at sharp 3 o'clock. Note that the Cairo-Dubai operation is shown at 5 o'clock, for an extreme example of geometry over geolocation.

What is rather staggering to consider is that just one of these cities is served by Czech Airlines today.  CSA has no transatlantic routes, and flies no further than Dubai in Asia. While the late Iron-bloc regime in Prague may have had geopolitical agendas for such an expansive operation, it is still astonishing that a larger, wealthier home base can no longer support such a wide variety of long-haul services.