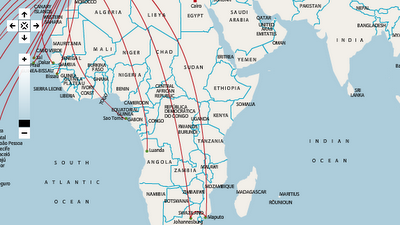 A post last week about the launch of Senegal Airlines was the first time that the city of Bissau had been featured on Timetablist. Here continues the profiling of Portuguese connections to Africa, with a portion of TAP Air Portugal's online map, showing its services to the continent.
Routes fan out from Lisbon to the capitals of former colonies: Bissau, Luanda, Maputo, and tiny Sao Tome, as well as non-Lusophone cities: Dakar at one end, Johannesburg at another, and Cairo on the far right corner. All are apparently served non-stop. At left, the many TAP routes from Lisbon and Porto to Brazil soar past Cap Vert toward South America.