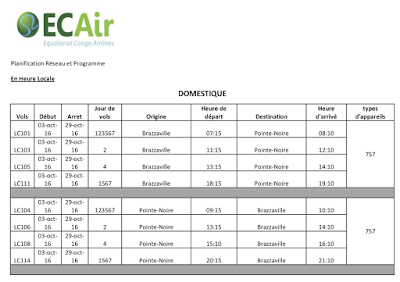 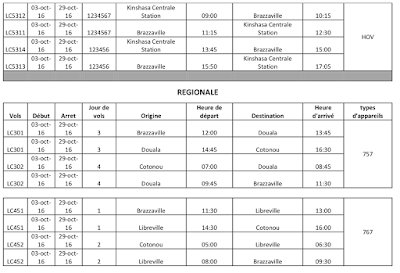 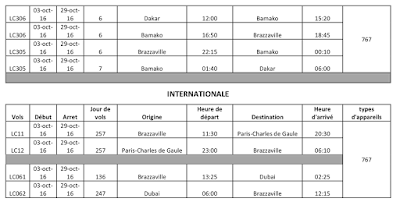 Someone knew their way around MS Word enough to author this straight-forward table of services for ECAir, the trade-name of Equatorial Congo Airlines, flag-carrier of the Republic of Congo, featured here on The Timetablist for the first time. For the month of October 2016 only, the schedule is divided into three tables: Domestic (detailing only the twice-daily flights between the capital Brazzaville and the Atlantic oil-hub at coastal Pointe-Noire) on a sizable B757.

In addition, an interesting sub-index of riverine runs across the mighty Congo to the nearby capital of the DRC, Kinshasa Central Station, almost recalling the manner in which Lufthansa or other European carriers link rail services to their timetables. The equipment type designates "HOV" which can only stand for Hovercraft or High Occupancy Vehicle, or both. No such ferry services specifically featuring a hovercraft are easily located.

The next block, regional services, lists once-weekly flights to and from Douala, Cotonou, Libreville, and Bamako-Dakar. More obvious links to Abidjan and Lomé are not part of the operation. Somewhat fascinating to see a large B767 on these routes.

Undoubtedly the pride of the company were the afternoon long-haul operations, alternating every other day between Paris-CDG and Dubai International with the B767 wet-leased from the Swiss charter company, PrivatAir, as the airline remained forever banned from bringing its own equipment into the airspace of the European Union.

Sadly however, in the very time frame that this schedule contemplates, the airline was shut-down in the same month, sadly never to be revived.