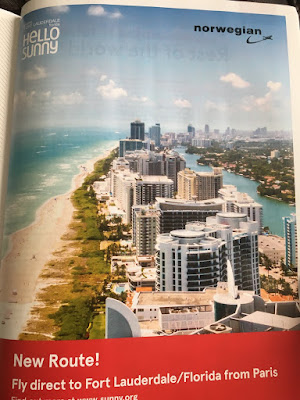 Yesterday's post discussed the acceleration of Newark Airport into an intercontinental gateway beginning around 1990, and the role of a Scandinavian airline in that growth. Here we have a similar circumstance, as the compact Ft. Lauderdale International Airport has grown from a discount, secondary airport into a major intercontinental gateway to balance Miami International in handling trans-ocean traffic into South Florida.

Ft. Lauderdale's profile was elevated with the appearance of Caribbean and Latin American feeder flights and Canadian snow-bird services. Today, flag carriers now reach Ft. Lauderdale from as far as Colombia, Ecuador, and, since 2014, Brazil. Most recently—and most astonishingly—there is now nonstop service to Dubai, with Emirates commencing non-stop B777 flights this week. Announced barely two months ago, UAE megacarrier chose FLL over Miami as its 11th U.S. gateway due to its inline partnership with Jetblue.

But as impressive as the 14+ flight distances are, a recent development that has greatly raised Ft. Lauderdale as a gateway to Europe has been the arrival of Norwegian Air Shuttle's dreamliners from its Long Haul division. Paris-CDG is the fifth European city that Norwegian is connecting to Broward County, beginning flights this past August. Norwegian will add Barcelona as its sixth non-stop next year. Also announced back in October: British Airways will also start flying from London-Gatwick in 2017, and Condor made the airport part of its nationwide entry into the U.S. market from Frankfurt.