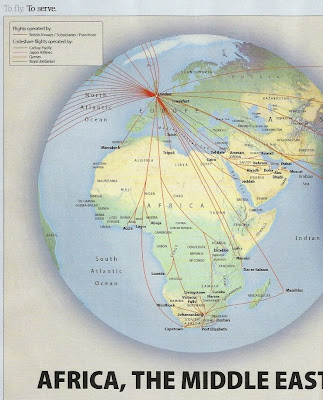 British Airways, a conservative carrier steeped in tradition, rarely makes changes, particularly to its unique route map illustration, which looks quite similar to this version from the beginning of the decade.

The only changes are the loss of direct BA services to Harare, and the absence of the Dakar-Freetown route. The former is still on the map, but only as part of the South African-centered Comair network.

Since this printing, Dar Es Salaam dropped from the schedule just this past March, and only last week BA announced the end of its historic service to Lusaka-- two legacy routes to former colonies that can no longer be commercially justified.