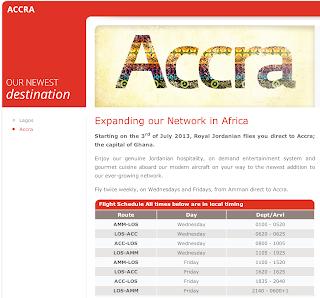 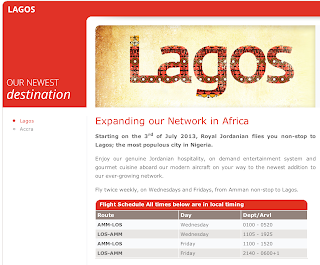 One of the newest entries into the fast-growing West African aviation market is Royal Jordanian, which  last month commenced a twice-weekly Amman-Lagos-Accra service on Wednesdays and Fridays. These colorfully-designed announcements appeared on the airline's website at the beginning of the summer.

While not as rapidly-expanding as the trio of Gulf supercarriers Emirates, Etihad, and Qatar Airways, little Royal Jordanian has reached Ghana before either of the latter two, using its dashing, charcoal-grey A330, according to Airline Route, which also notes a lack of local traffic rights between the two West African cities. Emirates flies to both Lagos and Accra daily, with the Accra service, usually on a massive A340, skipping on to Abidjan before returning to Dubai.