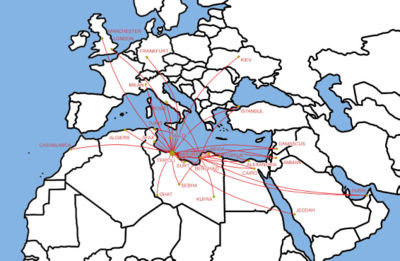 The much older, but now lesser-known of Libya's two state carriers, Libyan Arab Airlines has in recent years been eclipsed by Afriqiyah Airways, to the point that consolidation of the standard-bearer into the start-up was announced last fall. The two operate under one state holding company.
LAA's golden-trimmed jets continued to cover the region, especially North Africa and a handful of regional routes from bases at both Tripoli and Benghazi. Its not surprising that Frankfurt and London are served; Kiev is surely more curious. In previous years, LAA has reached as far as Amsterdam and Moscow, and in 2009 expansion to reach Niamey and Khartoum in the south and China on the other side of the globe was announced, but not acted upon--service south of the Sahara has been the mandate of Afriqiyah.
At present, there is no commercial air service out of Libya.
Special thanks to the perhaps-defunct Airliner Dude blog for the original article.